Last week I had the privilege of taking my family to Disney World for the entire week to spend time together as a family.  We have been trying to spend as much time as we can with one another before my two children leave to college at the end of the month.  First you must know that my family LOVES all things Disney, so it just seemed natural that we would make our summer trip to be to Disney World to take advantage of their youth before they officially become grown-ups living on their own at college.

It was an awesome week. We went to all of the different parks, Magic Kingdom, Epcot, Animal Kingdom, Typhoon Lagoon and Hollywood Adventure.  We had so much fun going on rides and seeing the shows.  It just so happened that the park was doing a special celebration from the movie FROZEN where they had a huge sing-a-long event that we were able to attend.  In the sing-a-long they brought together massive numbers of people and they played each song from the movie FROZEN and all the guests sang along to each song from the movie.  As I looked around the crowd I saw people from literally every part of the world.  There were people speaking a ton of different languages of every race and nationality at the park.  I couldn’t even count the number of parts of the world that were represented in the huge crowds.  But when the music started all those differences became obsolete.  Instantly everyone started singing at the top of their lungs.  Old people, young people, and everyone in between. They knew every word to the songs and no one held back from singing.  It was an incredible thing to witness.  It stayed with me the rest of the day that day, which was our first day there at the Disney for this trip.

Later in the week we went to Animal Kingdom Park and into a show from the Lion King.  Once again we were surrounded by huge numbers of people from every part of the world, speaking every language you could imagine, of every age, of every race, of every economic status, and the differences went on and on….we were in a room of people who had so many differences between them that you couldn’t have counted all of them.  Yet when the music started and the guests were invited to sing along to the song Hakuna Matata, everyone was united in one voice, singing at the top of their lungs, clapping their hands and celebrating with one another.  It was an amazing experience and it brought back the feelings from that first day that reminded me that it IS a SMALL WORLD when we set our differences aside and just sing along to something happy.  It was a much more profound experience then I would know how to put into words other than to say it taught me a great lesson about how we all have the desire to be happy and we all find joy in something as simple as a Disney song that makes you happy that we all know the words to be able to sing along to.

It was a great week last week and one I will remember forever.  One of the most fun moments of the trip was when my son Dalton challenged Goofy to a dance battle right on main street of Disney World.  Here is a short video clip showing the battle they had in the park (only a minute and a half) and it is WELL WORTH watching!  My boy has some mad skillz!!!: (if you are on a cell phone and can’t see the video screen below you can also click this hyperlink to get to it Dance Battle Video  ) 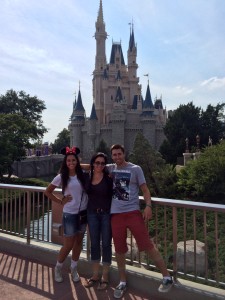 Kids and I at Disney World 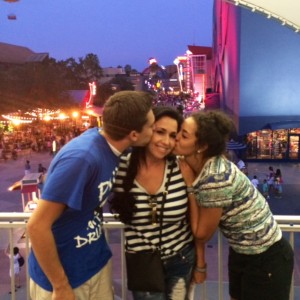 Have a great Monday everyone and this week try and put differences aside and try to remember that it is a small world when we allow it to be.