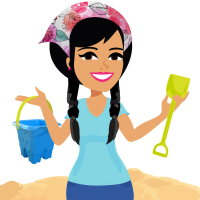 “In ancient Persia there was a man by the name of Ali Hafid who owned orchards, gardens, and fields of grain. Ali Hafid was rich. He was contented because he was wealthy, and he was wealthy because he was contented. One day a Buddhist priest came by Ali Hafid’s home, and together they sat by the fire. This Buddhist priest told how the Almighty put his finger in a bank of fog and started whirling it around faster and faster until it burst into a solid mass of flame. And then it went rolling off through the universe. As it did, it went through other fog banks, and the dew settled on the earth, and the crust began to form. As it formed, after it had gone through fog bank after fog bank, some of the inner eruption came forth. The priest said, “This is where we got our mountains and hills and our valleys and our deep gorges. This is the thing that beautified the earth. As the earth’s crust cooled, that which cooled most rapidly was granite; less rapidly, copper; then silver, gold, and last of all diamonds.” And the priest said to Ali Hafid, “If you had a diamond as big as your thumb, you could buy this whole country. If you had a diamond mine, you could place your children on thrones throughout the world.”

After the Buddhist priest had left, Ali Hafid went to bed. He was a poor man. He was poor because he was discontented, and he was discontented because he felt and feared that he was poor. He didn’t sleep all that night, and when the morning came, he arose early and went over to the Buddhist priest’s home and said to him, “I must find a diamond mine. Where should I look for one?”

The Buddhist priest, having been awakened early in the morning and not feeling too pleasant, said, “You look for a river between high mountains, and the river will flow on white sands, and there you will find diamonds.”

“There isn’t any such place.”

“There is,” replied the priest, “and there are many of them, and you will find them. You will always find diamonds.”

Ali Hafid answered, “Then I will go.” And he went home and sold his farm and collected the money. Then he left his family with a nearby neighbor and went on this search for diamonds. He started in the Mountains of the Moon, and then he went down into Palestine, and finally over into Europe. Many years later—in wretched poverty, having been driven all the way across Europe, not a penny left, in rags, heartsick, weary, tired—he stood on the bay of Barcelona. As a giant tide came in between the Pillars of Hercules, unable to resist the terrible temptation, he threw himself into the incoming tide and sank beneath the crest—never to rise again in this life…

The man who bought the farm from Ali Hafid went out to water his camel one day in the little stream that ran through the white sands of the farm. As he did, he saw something glistening in the sand. He reached down into the water and pulled a huge stone out. As he pulled it out, he noticed that it caught all the different hues of the rainbow, so he took it in the house and set it on his mantel. Three or four weeks later, the old Buddhist priest came by, entered the house, and soon spotted this rock on the mantel. He walked over and said, “Well, that’s a diamond! Has Ali Hafid returned?”

“No, Ali Hafid has not returned, and that’s not a diamond. It’s just a rock that I found out in my stream here.”

“That’s a diamond! I know diamonds!” the priest replied. So they went out and dug in the sands nearby, and with almost every shovelful of sand, they turned up more diamonds.

Ali Hafid’s farm was the Golconda mine, the richest diamond mine in all the history of the world. If Ali Hafid had stayed home and dug in his own fields, he would have had acres of diamonds.” (shared by Russell Conwell in the book Acres of Diamonds)————-

There are so many great ways to apply this to our own lives. We are all surrounded by diamonds if we turn our efforts toward finding them in our own homes.