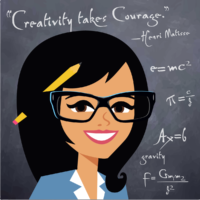 (Today’s blog is a guest post from my daughter Ashley because I’ve been at the hospital all day with my father-in-law who we finally got home and settled tonight just in time to get a call that our daughter-in-law is in labor with my second grandbaby! No sleep for me tonight!!)

DISRUPT YOUR ROUTINE TO JUMPSTART CREATIVITY – by Ashley Hill

On my way to class today I turned on my TED Radio Hour podcast and listened to an episode called “Jumpstart Creativity”. Tim Harford, writer and economist, suggested a simple tool that can help us draw out creativity from within ourselves – learn how to cope with a little mess. This means doing things that are purposefully contradictory to our daily routines, make us feel a bit uncomfortable, and might even flat out frustrate us.

He shared an example of a study where they gave two groups of students the same handouts during the course of the semester. The only difference is that one group’s handouts were written in Times New Roman font (standard and very easy to read), while the other groups were written in Comic Sans italicized (bouncy and difficult to read). What they found is that the group of students with the Comic Sans handouts did better on their final exams. Why? Because they had to slow down and work a bit harder, so they learned and retained more. These tiny disruptions helped them solve problems and become more creative.

He also shared about Brian Eno, a Rock ’n’ Roll composer who works with artists/bands like David Bowie, U2, Coldplay, etc. What does he do to make them better? He makes a mess and disrupts their processes. He developed a deck of cards with different instructions that he’d pull out during his sessions. One card might say “swap instrument roles” (drummer on guitar, singer on drums), or “make a sudden unpredictable action and incorporate it”. The musicians hated the cards. He mentioned that one time Phil Collins got so frustrated that he started throwing cans across the studio. However, some of their greatest hits came from these sessions. The takeaway? Just because we don’t like disruption doesn’t mean it’s not helping us.

The final example was about some major roads in London that shut down for 2 days. This forced people who commuted the same exact way to work every day to drive a different route. After the main roads opened back up, a small percentage of people never switched back to drive their normal route again. The shutdown actually helped them find faster routes, and ultimately changed their daily routine to drive a better way.

How many things do we do that if we were forced to differently, we would never go back? Today, my invitation is to find something in your routine that is small and simple (taking the same elevator, walking the same route to the bathroom, using the same drinking fountain, talking to the same people at work) and do it differently. We might all be surprised by the new circumstances, opportunities, and outcomes that could jumpstart our creativity! 🙂