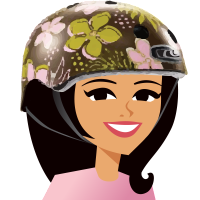 I’ve been known to be the first girl out on the dance floor, the girl who can’t sit still if she’s bored, a leader, an entrepreneur, a public speaker, a writer, and a philanthropist. What I am not known to be is a girl who does anything that requires walking long distances, running even short distances, or frankly doing any physical activity that requires breaking a sweat (except for dancing…I love dancing).  So when my friend announced that for her 50th birthday she wanted a group of us to go on a bicycle trip trip from Vermont to Montreal I was instantly like, “You are kidding…right??” Yeah, no…she wasn’t kidding…

You have to understand that I haven’t been on a bike since I was 12 years old…literally…my last bike was a Schwinn with a banana seat that had purple flowers on it and silver tassels hanging off the handle grips. The thought of even getting on a bike at my age terrified me!  Not to mention the fact that I am totally accident prone – so much so that my husband would tell you that if a hundred people were to walk across a football field together barefoot I would be the one person who would step on a nail – and he is SO RIGHT! I’m always the person who gets the random injuries (like me being slammed into the roof of an airplane a few weeks ago…). But what was I to do? She is my friend so how could I not support her on her 50th birthday by going?

When I told my husband and my kids I had decided to go ahead and go on the trip they literally busted out laughing. Not just a little haha laugh…these were the deep from the belly laughs where they threw back their heads and held their stomachs they were laughing so hard…my daughter laughed so hard she might have even cried a little.  When she stopped laughing enough to breathe she immediately said “I want video evidence!” My son said, “You gotta take pics! No one is ever going to believe this!”

Their responses made me even more afraid then I already was. so I decided I’d better call the tour company to ask about them if they thought I could handle it but when I told them I hadn’t ridden since I was 12 the person on the phone started laughing too! Then when they realized I wasn’t kidding around about that they got serious and told me I needed train four to five days each week for at least a month before the trip to condition myself. Train?? Four to five days??? Who has time for that??!  What was I getting myself into??  And when they went on to ask me if I planned to bring my own peddles to clip I I was like, “Clip in to what??? The pedals?! Are you crazy??? That would be the worst idea ever!!!” If they knew me at all they’d realize that would be a serious accident just waiting to happen. And don’t even start me on how I felt when they said I’d have to wear a helmet and padded shorts…so not only does my hair get to be a hot mess but my behind end is going to look ridiculously huge as well…

Look the  truth is that I have second guessed my decision to go on this bike trip a hundred times. I have SO many fears about it – but I have also spent my life telling people not to let fear stop them – so how could I allow my fear to stop me from riding a bike and not feel like a total hypocrite?  The answer is I couldn’t. I couldn’t allow my fear to stop me. If I’m horrible at it – so what! If I look ridiculous – who cares? At least I’ll be able to say that I TRIED my best and at the end of the day that’s all that truly matters – that we TRY!