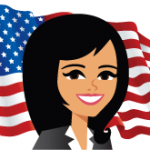 Friday and Saturday of last week were two incredibly long days of filming on the set of American Gnuity, the new reality television series which picks amazing entrepreneurial companies from across the country to be mentored until the top 20 teams are narrowed down to the top three by all of America who can support these companies by voting for them, investing in them, or purchasing their products or services.

I have been interviewed on television many times before but I have never been involved in the filming of an entire episode for a show. I had absolutely no idea how much work goes into it! We started at 8:30am Friday morning in hair and makeup (which in and of itself takes a while to have done), then it’s on to wardrobe to make sure everything is perfect and in place.  Next it’s on to the sound people to get you all hooked up to your microphone and to test that its taped in such a way that nothing will rub against the mic.  Next we were brought to our assigned seats on the set to do what I consider one of the most important things of all, which is the lighting check – the lighting is what will make or break how good you are going to look on tv – HUGELY important 🙂 – lucky for me they brought in the serious experts in lighting and camera angles…whew!

Next there are several practice runs of introductions and such, again tweaking sound and lights and makeup while we test everything out.  We are now several hours into the day and we haven’t even begun seeing the contestants for the day.  It was a seriously amazing amount of work that all the crew put into the production going on. It gave me a whole new respect for the television and film industry and for all of the people it takes to pull off a great show.  WOW!

Next we began seeing the companies one by one as they came in to do their pitches to myself and the other two judges.  I felt a little sorry for the early companies because we were all still learning ourselves as judges so it took us a few to get into the groove of things and to get comfortable with the situation.  But as the day went on we became more and more at ease in the situation.  Every time there was a switch of companies or a pause of taping the “vanity” crew would come running on the set to put makeup on us, fix the flyaway hairs, re position our shirts and jackets so no creases or wrinkles were showing and check to make sure our microphones we still taped on right.  It was unreal to have so many people fawning all over you all day long – you feel a little silly but at the same time you are thinking to yourself “I wish a crew like this could follow me all day just fixing my makeup and hair to keep it perfect!”  I was ready to take them home with me and never bring them back.   I think my lipstick was reapplied no less than 50 times or more, no joke.  We didn’t finish taping day one until sometime around 1 am I think.  So knowing I had to be back in hair and makeup by 8:30am the next morning was not the happiest thought at that moment, but I was excited to see more of the companies that were coming in.

Saturday we got went through the entire process again, only with less testing needed in the morning after hair and makeup.  We all had to be in the same wardrobe as the day before because the show would be edited down to appear as if the Salt Lake auditions took place on a single day – again, something I hadn’t thought about with shows.  Then we were back on the set seeing the companies come through.  As judges we were so much more comfortable day two because we were finally getting a rhythm down and each of us were getting more open with our feedback and comments.  It was a really great day with the exception of the air conditioning having to be turned off on the set because it was causing sound issues in taping.  The room was so hot, especially under the lights,that I was ready dying.  Between the heat on set and the lack of sleep from the night before it was harder and harder to keep my eyes open and stay peppy – so one of the helpers went and got us each a tiny bottle of five hour energy drinks – something I seriously never take….like ever….but as tired as we were I drank just half of the little bottle and in a few minutes I was bouncing off the walls.  It must have been bad because I heard the Director instruct the gals not to give me the rest of that bottle no matter what!  Even though we didn’t finish filming for the day until close to 2am!  I was sooo tired!  But the companies we saw over the two days were awesome and it was really hard to narrow the group down to move forward to the next round.  The cool thing is that even if a company wasn’t chosen in the judges group they will still be put on the web portal and America can vote teams back in, which is awesome.  There were so many good companies and I want to see all of them get through.

Well as tired as I am today I am happy I was able to be a part of the show.  The other two judges and the host are fantastic.  The Director and the entire crew are just awesome.  It is so fun to work with all of them. Next we go to several other cities around the country to hold auditions in each location so I will keep you updated as we go.  Here are a few fun photos from the shooting of episode one. 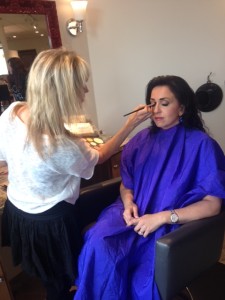 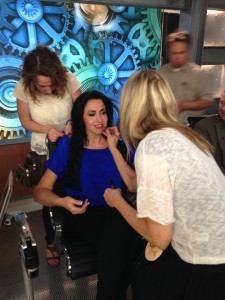 It took a village 🙂

My daughter stopped in for a visit 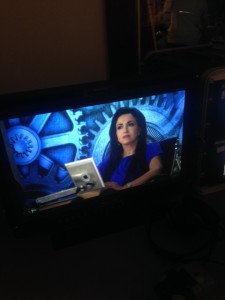 looking through the camera