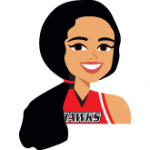 There is huge power in the examples set by the people we surround ourselves with.  Tonight I want to share a story of one of the great examples in my life.  My daughter Ashley is 17 years old.  For those of you who have followed my blog for a time, you are aware that last December my daughter tore her ACL while playing basketball with her High School team.  It was a devastating injury as it took from her the ability, for a season, to play the game she most loved in life, basketball. She had surgery on her ACL over Christmas so she could avoid missing too much school.  Once surgery was completed she started the brutal journey of daily physical therapy on her knee.  Watching her go through the process was painful as it was such a difficult and long recovery, more so than I had ever anticipated going into it.  She worked her tail off with the goal of being cleared for sports by summertime so she could once again play basketball and do watersports and dance and play like she could before.  But when summertime came she took her physical therapy test and she didn’t pass.  This girl, who almost never cries (she didn’t even cry when she tore her ACL during the basketball game!), broke down in tears of frustration.  She had worked so hard and so dedicated to be well again and she was horribly disappointed to hear that she hadn’t passed her test and would have to return in a month to try again.  Her re-test was scheduled to take place this Tuesday.

A few days ago, while attending a church youth conference, Ashley was hanging out with a group of people when it was suggested that they startup a basketball game.  Ashley hadn’t picked up a basketball since her injury last winter, but she was having a good time with the group and she didn’t even stop to think of her injury.  Instinct kicked in and she began charging for the basket with the ball when suddenly her knee popped and her leg gave out causing her to fall to the ground.  Once again she didn’t cry, but she hobbled back to the cabin to put her leg up.  Someone came to get me and I hurried over the cabin.  As soon as I saw her face my heart sank.  I knew that she knew what she had just done.  It was obvious by the look in her eyes.  She wouldn’t cry in front of people, but she and I both knew in our hearts what had happened.  I loaded her into the car and we rushed to get to the closest medical facility to have them check her leg.  We were able to get her surgeon’s office on the phone and the nurse relayed the news of our biggest fear – all signs were that she had re-torn her ACL.  My heart sank.  We set the appointment for Monday morning to confirm what sounded to be a certainty already in the nurse’s mind.  I tried to suggest that perhaps it was something less serious, hoping she would agree to that possibility, but with no avail.  We hung up the call and I broke down in tears with my daughter.

All that hard work, all the suffering she went through, all the missed dances and ball games and activities, and here we were at the very end of that journey and we would have to begin it all over again, only this time it would be twice as difficult because the doctors have to go twice as slow with the surgery being scheduled (they have to wait until your leg is fully healed from the last surgery before they will even consider a second surgery), and the physical therapy following surgery has to be spread out over twice the recovery in order to not take any risk of further damage to that knee.  The thought of having to start that process all over again just as she is heading into her last year of high school was heart breaking.  My heart just ached for her.

We cried a lot on that drive home together, feeling the weight of the journey ahead and recognizing all the things she would have to miss out on in her future.  But as we got into the house and got her settled on the couch she looked up at me with her teary eyes and said, “Mom its okay for me to cry today because it’s really sad that this happened, but starting tomorrow I need to buck up and have a good attitude and just get on top of what needs to happen to fix this and move forward.  There is no point in crying anymore after today because it is what it is and now I just need to handle it the very best I can with a positive attitude.”  I couldn’t even say anything back.  All I could do was sit there staring at her in absolute awe of her incredible strength and her amazing attitude. This 17 year old girl has more fortitude than just about anyone I know.  We hugged and I went to get her rehab equipment out of the storage room that we had just finally packed away a week before.   As I brought in the ice machine for her leg she started to laugh and said “I should probably name this thing because it’s pretty much like a member of the family at this point.”  I laughed for the first time that day.

The next day I let people know that we would be praying for her over the weekend and invited anyone who loved her to join in with us.  The response was amazing and it showed clearly just how loved this little girl is by so many.  One friend came by the house and asked, “What specifically would you have us pray for Ashley?”  As she thought to herself I called out “A miracle, pray for a miracle cause I want her to be healed.”  Ashley interrupted me and said “Pray for me to have the strength I need to handle whatever trial God needs me to go through.”

All I can say is WOW!  What an amazing young woman she is and what an amazing example she set for me and for everyone else.   Her courage is amazing. Her optimism is contagious.  Her love and trust in God is unshakable.  She is truly one of the greatest examples to me in this life. She is my hero.

I am not going to lie, I am still praying for a miracle, but if her ACL re-tear is confirmed in the morning I have faith that she will handle it with courage and strength because that is who she is.  I am so grateful for her example, and I hope to be just like her when I grow up 😉 .