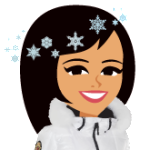 And snow it did! The snow started coming down late last night and by this morning it was already more than a foot deep. Now I happen to love looking out the window at the snow but I cannot stand having to go out into the snow! I don’t like the cold and I don’t like driving in the snow. But I had to leave my house early to get to an event at a High School where I was asked to be a judge (shark tank style) for the entrepreneurship class business plan presentations. I didn’t want to let the students down so I put on my coat and headed out. Pulling out of my street I knew it was going to be a treacherous drive when I saw numerous cars sliding down the hill and getting stuck in the snow drifts. And treacherous is exactly the word I would use to describe my treck to the school. It was crazy! Cars were getting stuck and crashing all over the place. I swear my knuckles turned white gripping my steering wheel as hard as I did. I slid right through an intersection without being able to stop and had to lay on my horn to let other drivers know I was in trouble and couldn’t stop. Thank heavens they heard my horn and stayed out of the intersection so that we didn’t crash! I really, really, really don’t like having to go out in the snow! There….I said it.

As much as I don’t like going out in the snow, and especially having to drive in it, there was something really cool that came from having to go out in the snow today. As I was driving down the hill I could not believe how many people were stopping their cars to get out and help all of the drivers who had spun out and become stuck in snow banks. I kid you not, for every car I saw stuck I saw at least two other cars stopped with drivers out in the freezing cold pushing the stuck car to try and help the person in trouble. No joking…at least two cars to every one car in trouble. And these people who had stopped to help others had to be freezing and miserable and I am sure each one of them had somewhere they needed to be this morning, but they put themselves aside and stopped to serve someone in need. It was the coolest thing in the world to see so many good samaratins giving service today. It was truly heartwarming and humbling to witness.

Thank heavens for incredible people with unselfish hearts of gold who are willing to help others in need. Not only do they help someone else, they also touch the lives of everyone who witnesses their kind acts of service. And today they touched my life, so thank you!!!