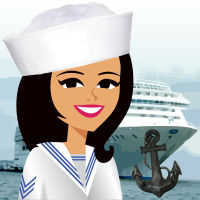 One of my very favorite speakers is Dieter F. Uchtdorf. He has a way of using stories to help teach messages in a way that resonates so clearly.  In one of his talks, “Your Potential, Your Privileges” he shares the following story:

“There once was a man whose lifelong dream was to board a cruise ship and sail the Mediterranean Sea. He dreamed of walking the streets of Rome, Athens, and Istanbul. He saved every penny until he had enough for his passage. Since money was tight, he brought an extra suitcase filled with cans of beans, boxes of crackers, and bags of powdered lemonade, and that is what he lived on every day.

He would have loved to take part in the many activities offered on the ship—working out in the gym, playing miniature golf, and swimming in the pool. He envied those who went to movies, shows, and cultural presentations. And, oh, how he yearned for only a taste of the amazing food he saw on the ship—every meal appeared to be a feast! But the man wanted to spend so very little money that he didn’t participate in any of these. He was able to see the cities he had longed to visit, but for the most part of the journey, he stayed in his cabin and ate only his humble food.

On the last day of the cruise, a crew member asked him which of the farewell parties he would be attending. It was then that the man learned that not only the farewell party but almost everything on board the cruise ship—the food, the entertainment, all the activities—had been included in the price of his ticket. Too late the man realized that he had been living far beneath his privileges.”

Love that reminder:  Never live a life that is beneath the privileges God has in store for you.