Tonight I took a group of teenage girls on a service project to go to an assisted living center to visit with a group of adorable, lovely Grandmas.  We sat the group of our 16 and 17 year old girls in a circle with group of Grandmas, all of which were widows.  We asked the Grandmas to tell us their best life stories, starting with the story of their very first kiss, to the moment they met the loves of their lives, to their wedding proposal, to the total years they were married before their husbands passed away.  Each of the ladies shared their amazing love stories.  They lit up just like young girls falling in love all over again as they shared their stories with us.  And what great stories they were!  The personality of each Grandma showed through as she told her own story.

There was 97 year old Grace who met her husband when she was only 15 years old and her family pulled into a gas station and a nice young man came to pump their gas…she married him a few years later and they were married for over 60+ years when her honey passed away.

Then there was Mimi.  Mimi was full of sass and swagger!  She shared her story of how she was at a party in college down in Dallas, Texas and she was hanging upside down from a chandelier when a cute boy walked beneath her and she grabbed his shirt to stop him – he looked at her and declared “oh, my gosh” in frustration.  Mimi was so offended that he didn’t tell her she was cute since she shared everyone else always told her how cute she was :), so she dropped him and he fell down.  Then once Mimi came down from the chandelier he asked her out and they ended up married for over 50 years.

The most romantic story of the night was the one of Betty Jane and her young husband.   They married during the depression and they had no money.  Betty Jane desperately longed to just have one new dress, but she didn’t want to ask her husband for any money as they were incredibly poor.  One day when she was pregnant with their first child he came home and handed her a $20 bill and told her he wanted her to have a new dress.  That meant the world to her.  She became choked up at this part of the story and let us know that she wasn’t sure she could get through the next part because the love of her life had passed away just a few short years ago and she missed him so….  She said that about two weeks before his death he came home very sick and told her to get dressed to go into town.  She said he rarely commanded her around like that so she knew it was important.  When they got downtown he took her hand and walked her into a dress shop and took her back to the rack of her size and told her to try several of the dresses on.  She did and loved them all.  He asked her which dressed she wanted most, and she turned and asked him which he preferred most on her.  He turned to the sales woman and told her to ring up all the dresses for his wife – he wanted her to have all the beautiful dresses.  He died just over a week later.  As she told her story we all became choked up at the romantic loving gesture of her husband and the tremendous love she had for him.

We asked all the Grandmas to give us their advice on how to make a marriage last as long as they had.  Their answers were so full of wisdom.  One said “Be committed.  Get engaged as much as you want but once you get married be committed 100%.”  Another said “Kiss and hug him all the time”.  Another said “Let him think he is in charge, even though you’re really in charge.”  Another said “Always make him feel that you believe he is capable of anything, even when you don’t think he is, always make him feel like you believe he is and he will do anything for you.”  The funniest comment of the night was when Norma said “Don’t kick him in the behind” only to have Mimi immediately yell out, “Yeah, kick him in the front!”.

These ladies shared story after story of love, and life, and their lessons learned.  As each of them talked you could see the 17 year old girl come out of each one of them – full of sparkle and humor and joy- just trapped in the failing bodies of 80 and 90 year old women.   Their wisdom was amazing and I truly wish I could have taken every single one of you with me tonight to be taught by these amazing women.  What started out as our group trying to be of service to these ladies turned out to be these ladies giving service to all of us!  I cannot recommend highly enough the exercise of going to visit the elderly in these care centers and letting them tell you their stories and the lessons they have learned in their lives.  They have been through so much and they have so much wisdom to teach us if we just take the time to listen.  Tonight I would chalk up as one of the greatest nights in a long time.  I can’t wait to go visit my new friends again at the rest home – We promised we would bring some Glen Miller Band songs with us the next time if they promised to teach us to Jitterbug!  I can’t wait! 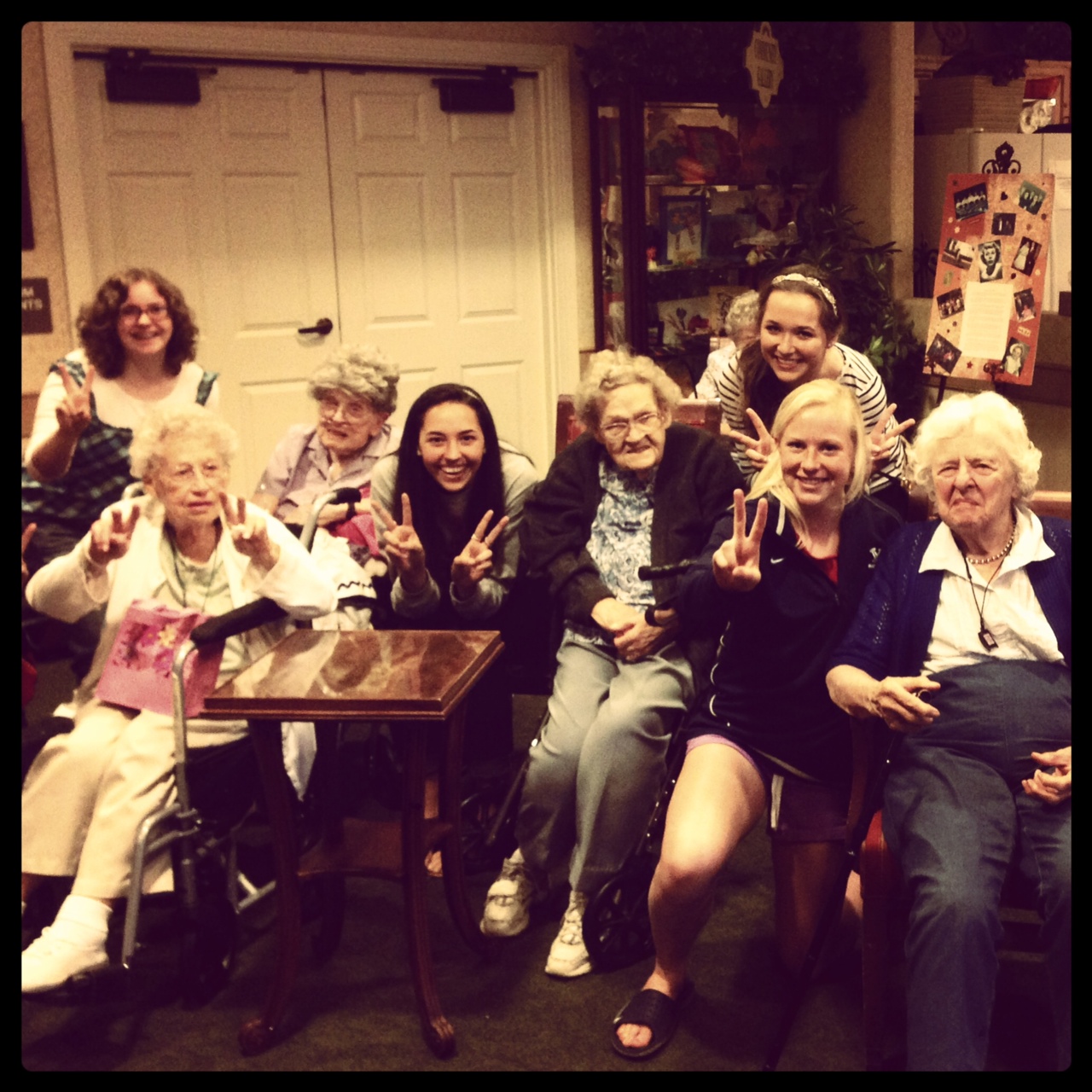