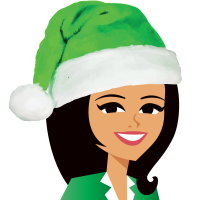 “Three thousand feet up! Up the side of Mt. Crumpit,

He rode with his load to the tiptop to dump it!

“Pooh-Pooh to the Whos!” he was grinch-ish-ly humming.

“They’re finding out now that no Christmas is coming!

“They’re just waking up! I know just what they’ll do!

“Their mouths will hang open a minute or two

“Then the Whos down in Who-ville will all cry Boo-Hoo!

“That’s a noise, “grinned the Grinch,

“That I simply MUST hear!”  So he paused. And the Grinch put his hand to his ear.

And he did hear a sound rising over the snow.

It started in low. Then it started to grow …

But the sound wasn’t sad!

Why, this sound sounded merry!

It couldn’t be so!

But it WAS merry! VERY!

He stared down at Who-ville!

The Grinch popped his eyes!

What he saw was a shocking surprise!

Every Who down in Who-ville, the tall and the small,

Was singing! Without any presents at all!

He HADN‘T stopped Christmas from coming!

Somehow or other, it came just the same!

And the Grinch, with his grinch-feet ice-cold in the snow,

Stood puzzling and puzzling: “How could it be so?”

“It came without packages, boxes or bags!”

And he puzzled three hours, till his puzzler was sore.

Then the Grinch thought of something he hadn’t before!

“Maybe Christmas,” he thought,“ doesn’t come from a store.

-(Excerpt from Dr Seuss, How the Grinch Who Stole Christmas)

As I was looking over some letters to Santa that my children had written in the form of an excel spreadsheet listing each of the items they want Santa to bring them this year along with the description of each item, a link to purchase it online, and the purchase price for each… I found myself struggling with how much this Christmas feeling far too much about all the ribbons, tags, packages, boxes, and bags….

Then I realized that it only becomes about those kinds of things if I allow it to. It’s normal for kids to get excited to write their letters to Santa with every item they could possibly wish for (admittedly an entire excel spreadsheet may be a bit over the top)…but that’s all part of the fun as kids to get to dream about things you’d love Santa to bring you.  But just like Ralphy’s parents told him in the movie A Christmas Story…some gifts we are better off not getting…after all, they could shoot an eye out 🙂

Plan now to make this Christmas season about loving and serving others and enjoying time with family and loved ones – laughing together, playing together, and making new memories together.  Maybe your children didn’t list those as things they want in their letters to Santa, but without a doubt they will be the gifts they will one day treasure the most.