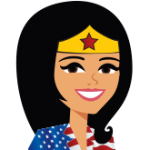 “There is a superhero inside all of us. We just need the courage to put on a cape.”

Today I saw a documentary at Sundance that showed the story of normal man who had the courage to put on his cape and become a superhero to many children who were being abused and taken advantage of. This man went beyond the call of duty to help children in need and he continues on his quest despite extremely difficult circumstances that work against him. He is choosing to be a superhero, and because of that he is changing children’s lives for the better. This man is just an ordinary person who has chosen to use his life to do extraordinary things.  AMAZING hero!

I would guess there were many times this man felt fear as he stood against others to protect little children, but the difference with this man and so many others that don’t stand up for what is right is that he did not allow his fear to stop him. He pushed forward anyway.

“I learned that courage was not the absence of fear, but the triumph over it. The brave man is not one who does not feel afraid, but he who conquers that fear.”  – Nelson Mandela

I loved the reminder today that every single one of us already has a superhero inside of us and all we have to do is have enough courage to put on our capes!  Which inner superhero do you have waiting to come out? I like to think I have a little Wonder Woman inside of me that is ready to come out whenever I put my imaginary cape on. Now I just need to have the courage to channel her a little more often so I can make the biggest impact possible.

Have an amazing day everyone and don’t forget to PUT ON YOUR CAPE!