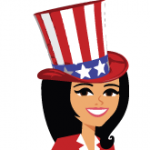 As many of you probably did as well, I have just finished watching the Presidential debate on television.   Normally I don’t voice my feelings about politics (so this is likely a one timer from me on this subject as I don’t really enjoy political debating), but tonight I feel compelled to express my thoughts on this presidential election.  What I am going to share is not a Democrat versus Republican point of view, because frankly in my personal opinion that isn’t even the issue at hand in this decision.  As far as I am concerned, the issue in this election isn’t about political party – this election is about one simple question – WHO WILL BE A BETTER CEO FOR AMERICA?

Having been a CEO for more years than I care to count, I am well aware of what it takes to run a successful company.   It takes absolute fiscal responsibility and it takes an ability to not just articulate, but to execute on operations.    A CEO can’t just be a person who speaks well in front of a crowd, and they can’t just be someone who can be charismatic and flash a nice smile.  A CEO has to be a person who knows how to lead, a CEO has to be someone who is willing to make hard decisions and stand by them, and a CEO has to be a person who is willing to be financially accountable in creating a sticking to a balanced budget in order to create a profitable country.

I realize that a lot of people say they think that Romney doesn’t come off as likable as Obama, and I will admit that Obama is better at sweet talking a crowd – but the reality is that sweet talking will not get our country out of the financial disaster that it has been dug into.  A CEO who can talk a big game but cannot deliver is a crappy CEO!  A CEO who knows how to lead and who has a proven track record of running successful businesses is a great CEO.

It honestly blows my mind that at this point anyone would even question which candidate will run the country as the better CEO.  Just look at the track record of who knows how to successfully make money and create jobs and balance budgets.  One candidate has proven that he can by his own past history, and one has proven that he cannot.  Any CEO who ran their business the way the current President has run our country’s economy would have been fired by their board of directors in a New York second.  So why in the world would we choose to keep a President who would have been fired from running our companies?  It makes no sense at all.

Like I said before, this election isn’t about Democrat or Republican, it’s about selecting the CEO that we have the most confidence in appointing to lead our country as the successful and growing business that it should be.  I wanted to scream at the television tonight – “we are the freaking United States of America for heaven’s sake!  We are the greatest country in the world!  We have more opportunity in this country and more freedoms in this country than any other country in the world.  We are not a society of inept people that need handouts from our government – we are amazingly capable of creating our own success if we just had a government that would get the heck out of our way and allow us do it!  We don’t need the government to create jobs to hire us – we don’t want to work for them – we want them to reduce our tax burden and let us keep our own money so we can create our own businesses and our own jobs and then we would be more than happy to offer them a job if they need one :).”  That’s what I’m talking about!

I don’t recall ever feeling so passionate about the importance of a Presidential election before.  But I truly think that this election will carry more importance for this country’s economic survival than any other election before.  Our current CEO of America is failing us and he has failed us for the past four years.  That is a longer failure period than we would allow any CEO of any company to keep their job.  It is time for Americans to stand up and use their votes to make a change.   We need to appoint a new CEO.

If you are still having trouble making a decision on who to vote for just ask yourself this question – if I started a company and invested all of the money I had into it, who would I rather hire to run that company for me as the CEO?  Obama?  Or Mitt Romney?  Who would I trust to make a better return on my investment for me?  Obama?  Or Mitt Romney?  Who do I think has a better track record of fiscal responsibility?  Obama or Mitt Romney?   This question is critical because America is your business and you have invested your entire life into being its citizen.  Not only that but you have invested not only your future into it, but the future of your children and grandchildren.  So the CEO you hire to run it is the most important decision in the world right now.  So again, I ask, who would you rather hire as your CEO?

That is the easiest answer in the world – MITT ROMNEY FOR CEO OF AMERICA!!!

Okay, I will agree to come off my soap box now, but before I do I just have to add that all of us need to get out there and use our voices!  We need to take a stand and use our power as citizens of this amazing country to stand up for the values and results we expect and deserve to see from our President and CEO of this country!