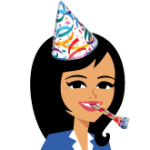 “The greatest gift you can give someone is your time. Because when you give your time you are giving a portion of your life that you will never get back.”

Reading that quote made me feel a little better today because I have been racking my brain all day to try and figure out the perfect gift to give my husband for his birthday this coming Saturday. It has been impossible to find him something because when he wants something he just goes and gets it…typically from Home Depot 🙂 . Seriously, the man lives at Home Depot…if I hadn’t gone there myself once to see the kindly old men working there I would have been worried about his motives for spending so much time there! So yeah, finding him a gift is impossible!  But then I saw this quote and now I figured out the perfect present – I will print off this quote and give it to him and tell him his gift is time with me 🙂  It’s perfect!

Speaking of birthdays and growing older, I have to warn you that what I am about to share might cause you to feel really old! It is a list of things that are turning 20 this year in 2015. As I read the list I was torn between feeling really old and feeling shocked that it had been 20 years already since these things came out!  Time really does fly by.  Here are a few of the things from the list of things turning 20 this year:

The Macarena:  The song by Los Del Rio that became a huge dance sensation.  You know you have all done this dance, whether you want to admit or not!

The TV Show “Full House” finale:  Okay I fully admit I watched this show and I had a huge crush on Uncle Jessie (played by the sexy John Stamos), but then again, who didn’t??

Nintendo 64 was released: Oh my gosh, I LOVED this game station. Dr. Mario has to be the single greatest video game ever released!  I would challenge anyone to a Dr. Mario game, anytime!

Coolio released the song “Gangster’s Paradise” and it ended up as the number one song of 1995. This song has a special place in my heart because my daughter Ashley was born in 1996 and the only song she would be quiet to in the car was Gangster’s Paradise. In fact if we played anything else on the radio she would literally start screaming until we played this song – and I am not even joking! I literally heard this song on repeat thousands of time and to this day I know every word of the song by heart.

Mike Myers did his last sketch on the TV Show Saturday Night Live. The man is a comic genius in my opinion. Who else could do Wayne’s World and make us actually laugh at his stupid humor? Good memories…good memories…

The Disney movie Toy Story was released. Best movie ever! Love this movie so much. My little boy Dalton was only two years old when this movie came out and he was obsessed with it. He still has his Woody doll in his bedroom today and no one is allowed to touch it!

DVD’s were born. Oh my gosh! This one really makes me feel old because I remember how excited we all were when DVDs came out. They were like the most amazing invention ever! It meant no longer needing to have cassette tapes and huge laser discs! I actually have Toy Story on Laser Disc still!  Classic!!!  Look how far it has all come since then…wow!

All I can say is “Time is precious…Waste it Wisely”

Have a great weekend everyone! And Happy Birthday Rollin, you sexy beast of a husband!!!!