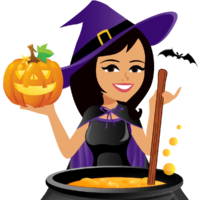 That was the biggest reason why, for the past several years as a way to get out of doing the doorbell thing, I’ve hired a DJ and thrown a big dance party in our driveway for all the trick-or-treaters in the neighborhood to come be a part of. It’s a tradition I have loved doing because it kept me from ever having to stand and answer the front door all night. But now that our kids are grown up and out of the house, I am afraid my husband and I are back to giving out candy the old fashioned way at the door…either that or turning off all the lights and pretending no one is home…hmmm…I’m kind of liking the sound of that last idea…mmmwwwwaaaahhh hahhhh hahhhh

600 million pounds of candy…That’s how much candy gets eaten on Halloween. Just the thought of 600 pounds of candy (for comparison the Titanic weighed 100 million pounds) being eaten is pretty dang scary to think about. And you know what else? You could literally die from eating too much Halloween candy. According to USA Today, a deadly dose of candy for an average person (which they cite as weighing 180 pounds) would be to eat 262 fun-sized bars or 1,627 pieces of candy corn.

I personally love candy corn, although I can assure you I won’t be eating 1,627 pieces of it. Do you have a favorite?  If you are curious which candy ranked as the best and worst Halloween candy – it turns out that the #1 worst candy is Circus Peanuts and the #1 best candy is Reese’s Peanut Butter Cups. No surprises there frankly.

The most important tip for trick-or-treaters is to be aware of the value of their candy when it comes to trading with your siblings and friends. You’ll definitely want to check out the Halloween Candy Fair Trading Guide that’s found here   After all, that 1 mini snickers bar should be worth 2 sour patch kids packets, and you don’t want to shortchange yourself on these ever so important negotiations!

Whatever you all decide to do for Halloween this year, be safe. And remember, if someone’s house lights are turned off it means their probably not home, so don’t waste a precious moment of your trick-or-treating time walking up to knock on their door. 🙂