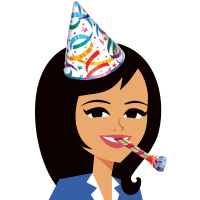 Tomorrow I will turn 46 years old. 46…why does that sound SO old?  I suppose its because I remember as a child looking at adults who were 46 years old and thinking “they are SO OLD” 😉

Most past birthdays I have dreaded getting another year older, and I suppose there is a big part of me that still definitely dreads the wrinkles and all the other exterior signs of aging that come with getting another year older…but what I can honestly say that I don’t dread this birthday is the fact that I have gained 46 years of life experience and wisdom that have shaped me into the person that I am today.

There is so much I’ve learned over 46 years of going through numerous failures, successes, tragedies, triumphs, hurts, heartaches, and happy times. With every struggle and hard time I’ve gone through I’ve gained additional wisdom and knowledge that has helped me to become better and smarter and wiser. While I’d like to say life would have been happier without the hard times I know that it was those difficult times that I was able to change for the better.

As I prepare to celebrate my birthday tomorrow a few of the life lessons that stand out to me as I’m reflecting on what I’ve learned over these last 46 years are:

I’ve learned that I can handle far more than I would have ever thought possible.

I’ve learned that it’s okay to admit to my weaknesses, and that doing so makes me a much stronger person than someone who doesn’t.

I’ve learned that people I love can sometimes hurt me… a lot.

I’ve learned that if I’m not careful I can sometimes hurt the people I love a lot too.

I’ve learned it’s always worth it to be patient, loving, and kind.

I’ve learned that some days are going to be hard…really hard…but if I just stand up straight and hold strong to my values that I will get through it…and I can rest assured that the sun will come up again tomorrow bringing with it a brand new day in which ANYTHING is possible.

I’ve learned that my faith can be stronger than my fears.

I’ve learned that in order to grow I have to be willing to do things that scare me.

I’ve learned that I only fail when I don’t try, or when I give up trying, because all I have to do to be successful is to try and keep trying.

I’ve learned that life is precious and my time in this life is limited, so I don’t want to waste a single moment of it on thoughts, feelings, or actions that won’t help me become a better person.

I’ve learned that forgiving can be really hard, but not forgiving is not an option if I want to be happy.

I’ve learned that my family is everything.

I’ve learned that my parents deserve more respect and gratitude than I have ever given to them for the many sacrifices they’ve made and for the love and support they’ve always given to me. I’ve also learned that my parents aren’t going to live forever so I had better take advantage of every moment I can to learn from them, to love them, and to make more memories with them while I can.

I’ve learned that marriage is hard, even when you love your spouse more than life itself. It takes work and sacrifice and humility along with being willing to truly put the other person’s needs above your own. It takes communicating and listening with a desire to understand the other person. It takes flirting and laughing and having fun together. It takes forgiving and asking to be forgiven without hesitation. It takes a commitment to stay together even on the days you don’t like each other very much. It takes total, complete fidelity, but it’s totally worth it.

I’ve learned that my time with my children is never to be taken for granted because the older they get the less time they have to spend with me, and the more and more I would give to have additional time with them. I’ve learned that raising good children is the greatest thing I could ever do with my time. And the most rewarding.

I’ve learned that Grandchildren are God’s gift to us to pay us back for all the sacrifices we made to be parents ourselves.

I’ve learned that true success isn’t a factor of making lots of money or getting loads of public recognition for things I’ve accomplished – success is living my life with integrity, having the love of my family forever, and being able to walk uprightly before God.

This birthday will be different for me because rather than mourning that I am getting older, I am going to CELEBRATE the fact that I am another year wiser and a little more fabulous! Now go eat a piece of cake to celebrate with me 🙂