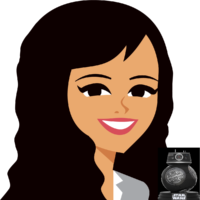 For those who aren’t aware of it, I have a 24 year old son, Dalton, who is absolutely, unequivocally, obsessed with Star Wars and all things Star Wars. Not only has he spent years collecting Star Wars Lego sets, he has made it his life goal to own every Star Wars Lego Set so he can someday reenact every Star Wars movie using said Lego sets. Not only that, but when he got engaged to be married back in August of 2015 he had a countdown app on his cell phone, only the app wasn’t counting down to his wedding date in November, it was counting down to the premiere of Star Wars VII back then. And two years later not much has changed…the countdown app isn’t counting days til Christmas, it’s counting days until Star Wars VIII premieres this week.

My son is without a doubt a Star Wars Mega-fan and he prides himself on being an expert on all things Star Wars. So when we walked out of Star Wars VII back in 2015 and I pointed out that Rey was clearly Luke’s daughter, he about lost his mind telling me that I was not a true Star Wars fan because if I was I would know that she wasn’t Luke’s daughter. To which I pointed out she was clearly Luke’s daughter because she picks up Luke’s lightsaber and Maz says to her, “That saber called to Luke and his father before him, and now it calls to you.” Duh! Clearly she’s his daughter, which also totally explains why Luke doesn’t want to train her to be a Jedi…after all everyone else who is trained that he loves was sucked over to the dark side and a father wouldn’t want to see that happen to his daughter. Could it be more obvious??!

Well this fight over whether Rey is Luke’s daughter or not has persisted for two years now and it’s all we can do to wait for the premiere of Star Wars VIII this week so we can hopefully put this fight to rest because the answer will be proven once and for all!

And so my son Dalton and I have come to an agreement – if it turns out that I was right (which I totally WILL BE!) then my son has to write an entire blog apologizing publicly to his Mother and he will have to recognize her as a bigger Star Wars expert than he is.   On the other hand, if he is right (which he totally WON’T BE) then I have to apologize to him in a blog and acknowledge that he is indeed the greater fan.

However I think it merit’s noting that while I have been willing to lay forth not only my theory as to whose daughter Rey is, I’ve also presented a backup theory which is that if she isn’t Luke’s daughter then she must be Leia and Han Solo’s daughter that they gave up to keep her safe from her evil older brother Kylo Ren. That’s two theories from me and zero from Dalton other than him proclaiming that Rey’s not Luke’s daughter.

And so this week at our house we are no longer focused on the countdown to Christmas as the Countdown to the Premiere of Star Wars VIII has trumped it! And in just four days we will both be going to see Star Wars VIII where it will prove once and for all who was right (VOTE FOR ME!) and who was wrong (ahem…can you say Dalton?). And the best part of all is that my movie tickets are for the show that starts one hour earlier than Dalton’s movie time so I get to know the answer before he does ….MWAHHH…HA….HA…HA….