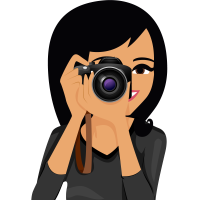 Last week my family and I went and stayed at a cabin in Kamas, Utah for some much needed family bonding time. I planned several fun activities for us such as attending a Queen Nation concert (a cover band that performs music from Queen), boating on the lake, watching a small town parade, playing card games, and attending the demolition derby (which is seriously one of the most amazingly fun things to go and do!).

At the beginning of the trip I found myself grabbing my phone to capture a lot of moments on camera and video, but in trying to capture those moments with my phone camera I began to realize in doing so I was cutting myself off from enjoying the very experiences I was trying to capture.

It’s so easy to whip out our phones and take a million photos and videos these days…but maybe its become too easy… I still remember the days when we all used old-school cameras that required us to buy expensive rolls of film in order to take pictures and then once the pictures were taken we had to go to a store to drop the film off in order to have it developed into prints which then took several days and cost even more money. Because of the expense and effort required to take photos, one only took pictures of things that were really important to them. Whereas nowadays we take photos of literally everything, all the time…but how often are we missing out on enjoying the moment when we are busy trying to capture it?

Do I think its awesome to capture special moments on photo or video? Yes. But do I think we may want to consider limiting how many pictures and videos we take so we can enjoy more of life’s moments while we are in them? Most definitely!

Don’t be cut off from the very experience you are trying to capture.