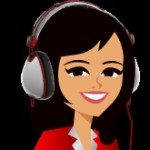 Okay, so I was watching the TV Show the X Factor tonight when this couple came out together and did a singing/rap song that a girl and guy in a group called Second Hand High wrote themselves.  The son was called “You Better Ask Me To Dance”.  When they first started singing the song my daughter and I were like “are they serious or is this a joke?” We continued listening for a few more minutes and suddenly we found ourselves starting to bop our heads to the beat….a few more seconds and we started dancing a little bit…a few more seconds and we were up on our feet dancing around the living room.  The camera on the screen panned around and suddenly the live audience who had been watching with the same look of “are they serious” in the beginning of the song began jumping out of their seats and dancing too. Next thing you know Kelly Rowland, one of the celebrity judges on the show, jumped out of her seat and began dancing around the judges table as well.

Sadly, the judges said they weren’t good enough to go on in the competition, however, we found ourselves rewinding their performance to watch it again and the second time there was no holding back our dance moves!  And an hour later, after the show was over, we found ourselves still singing the chorus of the song…it was dang catchy!

So why the heck would I share this story in my blog?  I will tell you why, because this story illustrates two great life lessons:

1.   It was the perfect reminder that we shouldn’t rush too quickly into passing judgment about something.  When that song first started I thought it was horrendous and a total joke.  I looked at the performers as two people without any music talent at all.  And truth be told, the performers singing the song were definitely not very good at singing it.  But those same two performers are the ones who wrote the song and the music for it and the fact is that the lyrics and the music were seriously AWESOME!  It was an incredibly catchy song with a great dance beat, and writing that took a true talent.  So my initial judgment was dead wrong. Those two people had a great talent in writing the song, even if they weren’t fantastic at performing it.

2.   The lesson for those performers is that they should stop trying to be violins and appreciate that they are amazing pianos!  What I mean by that is that these two people had obvious talent in writing music and lyrics.  But instead of recognizing that this is their talent, they were trying to force being seen as singers and performers – but they clearly don’t have that talent. These two people could have an amazing career as songwriters, writing number one hits that could be sung by singers with singing talent.  However, as long as they try to hold their songs for themselves, they will never be able to be as successful in their careers.

In life the smartest thing you can do in your pursuit of success is to recognize what your true God given talents are and then grow those and be grateful for those.  Don’t overlook your natural talents trying to force a talent that just isn’t your true gift. If you are a piano, be the best piano ever.  And if you are a violin, be the best violin ever.  Don’t waste your time trying to be something you’re not.  Instead spend your time becoming the best you can be, and be grateful and content with the talents you have been given.

So yeah, fairly deep thoughts from a simple X Factor episode, but as you know I write what I am feeling each day and today this was what struck me most, so this is what I am sharing.  For any of you who want to watch the performance I referenced on X-Factor, here is a link to the you-tube performance.  But before you click on it, just remember lesson number 1 above and don’t be too quick to rush to judgment…by the end of the song you will be dancing too!

Have a great day!
~Amy