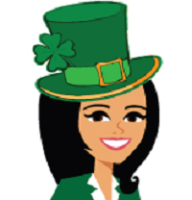 Happy St Patrick’s Day March 17th!  A for the sake of avoiding a pinch – remember to wear GREEEN!

Here’s the answers to a few things at St. Patrick’s Day you might not have known (cause I sure didn’t until I looked them up!):

Did you ever wonder why people pinch each other on St. Patrick’s Day if they aren’t wearing green? Apparently it’s a tradition that was started by Americans – St. Patrick celebrators believed wearing green made a person invisible to the leprechauns and so they believed anyone not wearing green was subject to getting pinched by the leprechauns so people started pinching each other to remind them to wear green. Which if you really think about it makes no sense at all – I will pinch you to remind you not to get pinched?! I can’t help but wonder if alcohol played a part in that tradition getting started 😉

And then there’s that term “The luck of the Irish”. Did you ever wonder where it comes from? I always assumed it was from Ireland but I looked it up and discovered that’s not the case. According to Professor Edward T. O’ Donnell, an expert in Irish American History:

“During the gold and silver rush years in the second half of the 19th century, a number of the most famous and successful miners were of Irish and Irish American birth. . . .Over time this association of the Irish with mining fortunes led to the expression ‘luck of the Irish.'”

The one thing I do know is that St. Patrick’s Day was always a lot of fun at our house when my kids were little. Every St. Patty’s day they would find little leprechaun tracks somewhere in the house (made with a little bit of flour sprinkled into leprechaun looking tracks). When they followed the prints they would lead the kids to discover the leprechauns pot of gold which always looked identical to a bowl of golden wrapped Rolo candies (…crazy enough the pot of gold tasted exactly like Rolo’s too 🙂 ). It was a fun tradition and one I am excited to start again for my grandkids in the coming years.

What I love about St. Patrick’s Day is that it reminds me that we can all have the luck of the Irish in life if we simply believe we are lucky! Have a lucky weekend everyone!