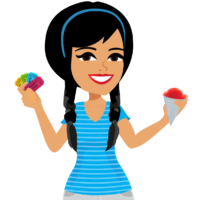 We told ourselves it was a good idea at the time.  Two of my girlfriends and I were on a trip to New York City several years ago when we decided to order the Quattro Cookie Sundae at Planet Hollywood in Time Square for dessert. What was delivered to our table was a GINORMOUS ice cream sundae that was big enough to feed a small village, along with a hot fudge brownie sundae and a vanilla milkshake.

Perhaps we should have been deterred by the shocked faces of the other patrons in the restaurant, but the draw of the hot fudge, extra caramel and whipped cream was just too powerful to resist.  So we grabbed our spoons and dug in to the literal mountain of ice cream, cookies, and toppings…and we dug…and we dug…and we dug….until that mountain became nothing more than streaks at the bottom of the ginormous dish.  As we shoveled each bite into our mouths we all proclaimed how unbelievably amazing it tasted, how it was such a good idea to order these desserts, and how heavenly each bite tasted.  For that moment, all was well with the world…..but only for about two more minutes until the weight (and I mean literal weight) of what we had just eaten hit us.  We couldn’t stand up…we couldn’t move…we were literally slipping into an ice cream coma.  In fact I am fairly certain we started to see a light at some point…”don’t go into the light” we had to tell each other…

We told ourselves it was a good idea at the time, but the truth is that we knew better going into it.  It didn’t take a genius to look at this 5 pound bowl of ice cream and know that putting all of it into our mouths would be a bad idea.  We knew better, but we did it anyway…all the time telling ourselves how worth it that it was….until it was over….and then….let’s just say, SO NOT WORTH IT!

In life we know what is smart behavior and what is not, yet often times we tell ourselves “this is totally worth it”, even though deep down we know dang well that we will regret it later…yet we do it anyway, pushing the consequences out of our minds…..which is all well and good until you start slipping into an ice cream coma… Sure, some of us may be lucky enough to avoid going into the light, but others are not so lucky, and the risk just isn’t worth taking….