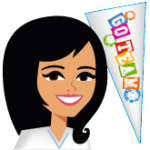 Tonight my husband and I took my son and daughter-in-law to the Utah Jazz versus the Golden State Warriors basketball game. Now anyone who follows basketball knows that the Golden State Warriors are killing it this year – playing undefeated so far this season. So going into the ball game we didn’t have the expectation of winning, but we thought it would still be fun to watch Stephen Curry of the Warriors play, especially with all the hype about his mad skills. And we always love watching Gordon Hayward and Derrick Favors of the Jazz play.

I couldn’t help but think how hard it would be to go into the game as one of the Utah Jazz players. Here you are, going in to play a team that has won the past 18 games. 18 GAMES! Talk about intimidating odds… But the Jazz came out strong and they played an amazing game against the Warriors. So amazing in fact that they were winning the game with one minute to go.  Are you kidding me??!! The crowd went totally wild. The intensity in the room was indescribable.  The fans were all holding their breath as we went into the final minute…it came down to the last 2.4 seconds and Curry scored a three pointer winning the game for the Warriors. But even though the Jazz lost the game they came the very closest all season to winning against the Warriors.

What I LOVED about the game was the fact that the Utah Jazz gave it their all til the bitter end. And that is what made the game so amazing to watch! Even though they lost it was inspiring for all of their fans watching them play tonight.

There is something so inspiring about people who go up against the odds, who give it their very best, and who continue giving their best to the bitter end.  It doesn’t matter if they win or lose – it is their effort and their performance that is truly inspiring!

Go against the odds. Who cares if the other team has an 18 game winning streak? Play the game against them anyway! And when you play it, give it everything you’ve got, not just going into the game but right up to the very end….whether you win or lose you will inspire every single person who watches. And that makes it all worth it.