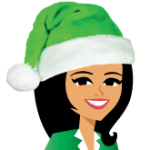 I love giving presents. I love planning surprises and putting thought into the little details and making a gift really special. I have so much fun anticipating the other person’s excitement and reaction that giving is way more exciting for me than getting a present. Not that I don’t love, love, love getting a gift – I mean come on, who doesn’t?!? But I can honestly say that I have way more fun with the giving.

What is NOT fun for me is holding out from telling someone once I have their gift. I am the WORST when it comes to keeping presents I got for someone a secret…like the WORST!  It has always been a problem for me when it comes to gift giving. I get so excited about the gift I have for someone that I literally burst at the seams trying to keep the secret in. I would never have made it as one of Santa’s elves! Knowing what every good girl and boy was going to get would be too much to handle! I have been agonizing about what to give my husband for Christmas and today I finally figured it out and got it all in place but now it is going to KILL ME to not be able to jump up and down and scream with excitement! I can’t believe I have to hold it in like this….argghhhh….

“Research by social psychologist Liz Dunn and her colleagues appearing in the journal of Science shows that people’s sense of happiness is greater when they spend relatively more on others than on themselves. In one survey of over 600 U.S. citizens, Dunn and colleagues found that spending money on others predicted greater happiness whereas spending money on oneself did not, and this pattern was found across all income levels. In other words, even those with little money reported greater happiness when their proportion of spending on others, relative to the self, was greater.

In a more controlled experiment, Dunn and colleagues gave students at the University of British Columbia an envelope containing money and told them that they either (1) had to spend the money on themselves before 5 p.m. that day or (2) had to spend the money on someone else before 5 p.m. Those who gifted for others were happier than those who gifted for themselves.

So there you have it! It’s a fact! It is better for you personally to give than to receive, so this holiday season put extra thought into your gifts. Remember that they don’t have to cost money, in fact the most meaningful gifts typically don’t cost much at all! The most meaningful gifts are the ones that you put thought into making them personal and meaningful, like a handwritten card, or a digital photo frame with meaningful photos, or a handmade craft of some kind. Those are the gifts someone will hang on to long after the expensive gifts have worn out.

Have a great week everyone! I will if I can just figure out how to keep my gifts I am giving a secret without bursting out to tell them!