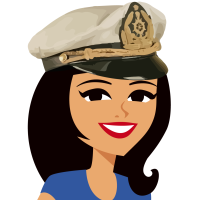 It was nine days ago and my husband and I had just arrived down to our houseboat on Lake Powell to prepare things for the group of families we would be hosting for the upcoming week.  I began unloading groceries as my husband climbed down into the hull of the boat to check our tanks and such. About 45 minutes later the smell of bleach in our houseboat was so overwhelming I was finding it hard to breathe.  I yelled down to my husband in the hull but he wasn’t responding…after calling down there several times with no response I began to worry that maybe he’d passed out down there from the fumes I could smell.  I was starting to panic.  I began opening every hatch to the hull to try and locate him and after what seemed like forever I finally heard a muffled response telling me he was coming out.  He crawled out of the hull coughing like crazy and carrying an empty gallon of bleach and an empty gallon of vinegar with him. “You didn’t mix those did you???”  I asked.  “Yeah,” he responded. “YOU CAN’T MIX THOSE TOGETHER !!!” I said.  “Why not?” he replied, “Bleach is a good cleaner and vinegar is a good cleaner so together they should be twice as good.” “When you mix them they are toxic!” I said. “No wonder we can’t breathe!”

He didn’t believe me.  He thought I was just being paranoid about the danger of mixing the two together. I grabbed my phone and Googled it and an article popped up saying to call poison control immediately.  Still thinking it was a big overreaction my husband begrudgingly called poison control.  When he explained that he’d mixed a gallon of bleach and a gallon of vinegar the person on the other end of the line told him he’d created chlorine gas which is toxic. They instructed us to evacuate our houseboat and open it up to air out completely before getting back on as the gas can be deadly.  Unfortunately we’d already been breathing chlorine gas for several hours by this point and our throats were on fire.

As we drove to town around 3am trying to find a hotel where we could sleep, the seriousness of the danger we’d been in really hit us and it was even more so when a call from the Center For Disease Control (CDC) came through checking to see if we were still alive…

They say your life flashes before your eyes in a near death experience, but in our case it flashed by our eyes a few hours later when it hit us how blessed we were to still be alive.  Thank heavens the gas aired out of the houseboat before our children and grandchildren and guests all arrived to the houseboat a few days later.

What that experience taught me was that we shouldn’t wait for a near death experience before we appreciate how precious life is…we should treasure every moment and spend as much time as possible with the people we love.

Speaking of spending time with those we love – today is my grandson’s second birthday so I have to say Happy Birthday Flynn!!!