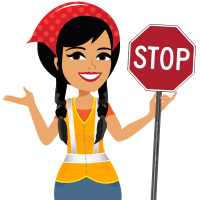 Following a lunch meeting with two business associates that had come in town for a meeting today I offered to drive them both down with me to our next meeting so we wouldn’t have to take two cars. Now before I tell you what happened next, in my defense I have to say that this happened in an area that has major construction going on along with several new freeway on-ramps and off-ramps being built so there are cones and barrels everywhere as well as detours all over the place which makes it all incredibly confusing to navigate.

I was driving as we left the restaurant and headed toward the freeway on-ramp. I turned right to get on the on-ramp and I immediately thought I had accidentally turned one street early and had entered the frontage road by mistake – after all, it had the very same barrels and cones for construction as the frontage road did, so I quickly did a U-turn to try and go back to the road so I could take the next right and get on the freeway. Just as I did one of my passengers asked “Wait, can you do that? I think you are going in the wrong direction?” I looked up and saw that I could only see the backside of the stoplight ahead of us realized that sure enough, I had made a U-turn on the freeway onramp and I was now facing the wrong way on the left turning lane of the freeway on-ramp. YIKES!!!!

Thank heavens there were no cars coming at me!  And I say thank heavens because that on-ramp is crazy during lunch traffic and it was a serious miracle no cars were coming at us head on and that we were able to do another quick U-turn and get onto the freeway without being hit.  But my poor passengers! I must have seriously scared the bajeebees out of them!  It sure scared the bajeebees out of me!  But thank heavens they were in the car with me to point out I was going the wrong way before it was too late.

Sometimes in life we do incredibly stupid things. Sometimes we get confused by everything going on around us (like construction barrels and detour signs!) and we head in the wrong direction. It happens. When it happens, hopefully you’ve surrounded yourself with good people who will point it out to like I was today, flip a U-turn as fast as humanly possible and get yourself headed back in the right direction!