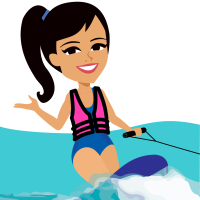 Have you ever had a daydream about doing something really incredible?  But then you quickly dismiss it because you are almost afraid to admit to wanting it because people might think you were nuts for wanting something that may appear so out of reach?  We’ve all been there… But here’s the thing – what’s would be the harm of setting that crazy big dream as your goal?

Maybe you’re hesitating because a part of you is afraid people will make fun of you for setting it as a goal?  Let them! People that make fun of it do so because they are feeling jealous that you had the courage to try…deep down they wish they had that kind of courage too. Who knows…perhaps you will inspire them to have a little more courage because you were willing to.

Maybe you’re hesitating because the barriers you’d have to face feel insurmountable.  Every barrier feels insurmountable at first – that’s why it’s called a barrier. But you’ll never know if a barrier can be knocked over until you start trying to get past them, and you’ll be surprised how many barriers dissolve when you tell yourself you are going to find a way to get past all of them.

My family spends a lot of time at Lake Powell boating in the summers. When I first was learning to cross the wake on my wakeboard I would look at the wave I was trying to cross and see how big it was and every time I tried to cross it I would wipe out. My husband finally told me I should stop looking at the wave I was trying to cross and instead keep my eyes on the canyon wall off in the distance and aim for that. Keeping my eyes on the wall in the distance worked like a charm and I crossed that huge wake without a problem.  Achieving our goals is much like that. If we are looking at the immediate barriers we will likely wipe out, but if we keep our eyes on the goal and just aim for it, we will cross those barriers without a problem.

Make your daydream into your goal. Don’t hold back or worry about them being too big or audacious. I say the bigger the better!  And remember the trick is to KEEP YOU EYES ON THE WALL!