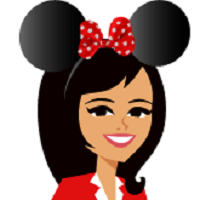 Over the holiday weekend my husband and I went with a couple of friends to the one… the only… (drumroll please) …DISNEYLAND! 🙂 #happiestplaceonearth

Upon arrival, and after what felt like a 5,000-hour road trip, we decided to hit up the magical street of Downtown Disney to get us in the right spirits. Only after frolicking through the fresh churros stands (my husband Alex would like me to add here that these delectable treats could make any grown man cry), giant Lego creations, collectable pin shops, and talented street artists, we decided to grab a quick bite to eat. The weather was fair, so we found a cheap restaurant with outdoor seating. As we started digging in, we noticed two darling little girls sitting next to us at a table of four. Two of the chairs were taken by the girls, and the other two were taken by a huge stuffed Winne the Pooh and Eeyore. They were having their own personal meal and conversation with their new little friends. One of them accidentally kept bumping my husband’s back (since she was so excited about her new toy and trying to show it off), so her dad looked over at us from another table and apologized for her, telling his daughter that if she did it again she’d have to give my husband her Winnie the Pooh doll. She then looked at Alex, apologized, and proceeded to tell us in a very proud manner that her dad had just bought the doll for only $39.99. We all got a good laugh, and kept watching their interaction with their new furry friends at the table.

Watching this moment was probably the sweetest experience we had over the whole weekend. These two little girls’ eyes absolutely lit up with the magic of Disney, knowing that not only was it possible for their wildest dreams to come true, but that they WERE coming true.

Life and its trials have a way of infusing us with pessimism. But after this sweet interaction, I was inspired to try my very hardest to somehow hold onto that childlike imagination and optimism I saw contained in those two little bodies that night.

“That’s the real trouble with the world. Too many people grow up.”

“It’s kind of fun to do the impossible.”

“Laughter is timeless, imagination has no age, dreams are forever.”

This week, I invite everyone reading this, no matter what you’re going through, to channel their inner child and dream again! It’s a whole lot more fun!  🙂