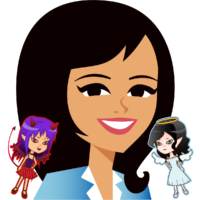 Each day this week I’ve been sharing different excerpts from the book I wrote titled “What Awesome Looks Like: How To Excel In Business & Life” in my blog posts. Today I’ll be sharing an excerpt from Chapter 8:

As a business leader, I found that one of the scariest things was to give my people the freedom to make mistakes. While mistakes allow individuals to learn and grow, they can also be very costly. Scared as I was, I knew that truly great leaders found ways to allow their people to take these risks, and I genuinely wanted to be a great leader. I wanted to help my employees grow, so I set out to discover how to accomplish this without placing my company in jeopardy.

“Courage is not the absence of fear, but rather the judgment that something else is more important than fear.” —Ambrose Redmoon

I quickly discovered there were two steps I needed to take. The first was to determine the areas of the business where a mistake would not cause too much damage. I took careful attention to make sure any areas where we would damage our clients and the trust they had placed in us were off limits for significant risk without serious executive involvement and oversight. I identified other areas where I could feel more comfortable allowing people the freedom to experiment on new and better ways of doing things.

The second step was to communicate to the employees that we were setting an official company policy: Making any mistake once was okay, so long as it was an honest mistake made while attempting to do what they felt was the right thing. But repeating that same mistake a second time was not okay. The hard, fast rule was that if you made any mistake the first time, the entire team would have your back in fixing it if anything went wrong. However, if you ever repeated that mistake, you would face the consequences 100 percent on your own.

We all make mistakes—every one of us. If we aren’t making mistakes, we likely aren’t trying enough new things outside our comfort zone—and that itself is a mistake, robbing you of the best way to learn and grow as a person. As John Wooden once said, “If you’re not making mistakes, then you’re not doing anything.” Mistakes are the pathway to great ideas and innovation. Mistakes are the stepping stones leading out of the comfort zone and into the growing zone, where new discoveries are made and great lessons are learned. Mistakes are not failures; they are simply the process of eliminating ways that won’t work in order to come closer to the ways that will.

Great leaders allow their people the freedom to make mistakes. But good employees are those who, when mistakes are made, (1) learn from them, (2) own them, (3) fix them, and (4) put safeguards in place to ensure the same mistake will never be repeated again.

The Steps to Correcting Mistakes

1. Learn from them: Good employees recognize when they have made an honest mistake. They do not get defensive about it, but instead are willing to look objectively at their mistake, recognize what they did wrong, and understand why their choice or actions were the wrong thing to do.

2. Own them: Good employees take accountability for their mistakes. They admit them readily. They don’t make excuses for a mistake, but instead acknowledge that yes, they made a mistake, and they express openly what lesson they have learned from that mistake.

3. Fix them: Good employees do what it takes to rectify their wrongs. They do all they can to fix it and make it right.  Certainly there are times when the damage is done and recompense cannot be made, but good employees do their very best to repair whatever damage has been done to the best of their ability. They always establish a timeline with follow up for when the problem will be fixed, and make sure that progress is communicated so that everyone feels the urgency and care with which they are correcting the problem.

4. Put safeguards in place to ensure the same mistake will never be repeated: This is the most critical step in the learning process. When a mistake has clearly been made, the most important thing anyone can do is figure out what safety nets and roadblocks can be established to ensure that this same mistake will not happen again. Document this step so that the lessons learned and the safeguards set up can always go beyond you. Do everything in your power to help others learn from your mistake so that they don’t have to experience it firsthand.

The steps in correcting mistakes apply to any area of life. Whether it’s business life, home life, or personal life, the principles of apologizing remain the same. Good employees make a lot of mistakes, and truly great employees are those who have mastered the art of apologizing for those mistakes.

The Six A’s of a Proper Apology

2. Apologize—I am sorry for making the mistake.

3. Acknowledge—I recognize where I went wrong that caused my mistake to occur.

4. Attest—I plan to do the following to fix the mistake, on this specific timeline.

5. Assure—I will put the following protections in place to ensure that I do not make the same mistake again.

If any of you would like copies of the entire book you can order them here.