September 11th is always a tough day to write my blog because there is so much emotion when I think back to that day in 2001.  I can remember exactly where I was standing when I saw the news station as it showed the tower that the first airplane had flown into, and I remember watching as that second airplane came right into the second tower – at first I thought I must be watching a trailer for a movie rather than the actual news report…then came the shock of realizing this was really happening, followed by the horror of wondering how anyone could do something so horrible…it was as if that day time went in slow motion as we all sat frozen with our eyes glued to the news stations. I remember the fear of wondering if my family members living back east were okay or not and the realization that my father was traveling for business and I had no idea where his plane was headed.  I remember every minute of that day, where I was, who I was with, everything that happened….it was one of the days that is seared into all of our memories for the rest of time.

What my thoughts go to the most from that day is not those people that performed the horrific act of terrorism; it’s the amazing number of ordinary men and women who became heroes that day.  I think of those firemen and policemen who so bravely put themselves into harm’s way that day as they rushed in to save any survivors they could find.  They performed the most selfless act of service anyone could perform by willingly risking their own lives in order to save the lives of others.  They were ordinary men and women who CHOSE to do an extraordinary thing.  That’s what made them heroes – they chose to do it.  They could have sat back in fear, but they chose not to.  They knew the risks.  They too had loved ones waiting at home for them.  But they put thoughts of their own wellbeing aside and they rushed to help those people who desperately needed them.    And because of their heroism many people survived who otherwise wouldn’t have.  Because of their heroism many of them didn’t make it – having given their own lives for the sake of another.  Heroes.  True Heroes.

Those heroes set an example for all of us to follow, and I am forever grateful for that example.  They touched the lives of countless people that day.  Not just those people they saved, it went well beyond that.  It spread to all of us across the world that watched and prayed and marveled at what they did in service of others.  And all of us were affected by that. All of us were touched by that.  And hopefully many of us were inspired to be better people because of their great example.

May we all choose to do extraordinary things when called upon.  May we live up to the legacy they left behind.

In loving memory of the Heroes, 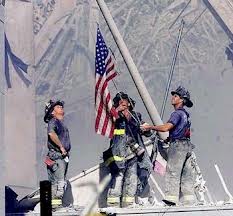