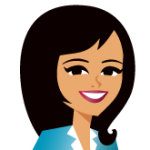 It’s so easy in life to think that because you are trying to live your life right and do good things that therefore nothing bad should happen to you. I mean that would seem to make sense, right?!?! Wrong…not wrong that it would make sense but wrong that it just doesn’t work that way…unfortunately.

Bad things happen to good people all the time.  In fact it seems like some of the very best people have the very worst trials in their life. For example I had a Grandmother who was as dang near perfect a person as I have ever known in this world. She was good and kind and generous beyond belief. She was as honest a person as you could be and she lived her life by her beliefs and values at all times. She was amazing. That same grandmother lost four of her children when they were either babies or young children. She then lost an adult daughter to cancer. Her husband was hit by a drink driver when she had a house full of small children and almost every major bone in his body was broken. He barely survived and it was years of recovery for him. Oh, and she herself had cancer and had more surgeries than I could even begin to count. The woman literally suffered about every physical ailment known to man and went through every type of loss you can imagine. And this woman was dang near perfect…literally a saint. If anyone deserved a trouble free life, she did!

But that isn’t how it works. Being good doesn’t mean you won’t have hard times. Every single one of us is vulnerable to facing hard times in our life. No one is exempt from them. They just aren’t. And when you see a person going through a rough time the last thing anyone should assume is that they somehow deserve it. Now sure, there may be some people who make bad choices that bring hard times upon themselves, that’s true. But in so many situations the person didn’t do anything wrong at all to cause the trial they are going through. Bad things just happen. So we should never jump to judgment as we see others going through struggles. Give people the benefit of the doubt and then hope they will do the same for you someday.

What’s amazing is to watch how good people going through bad things handle it. Going back to my Grandmother, I never once heard that woman complain during her life. I am not kidding, I literally cannot think of a time she complained or asked, “Why me?” And she never acted as if she were anything but blessed. She was always positive and looking for the good in every situation. She never faltered in her faith in God. She believed that this life was a time for each of us to be tested and tried and this life was a time to refine us into more patient and loving people. So she took on each trial with faith and patience. What an amazing example she set for her posterity. Anytime something goes wrong in my life I have to stop and think “How can I complain when Grandma had it so much worse!” Perhaps that’s part of why she went through the trials she did…to set an example for her posterity…and that she did.

I found this cute picture and had to include it today just to end today with a smile: 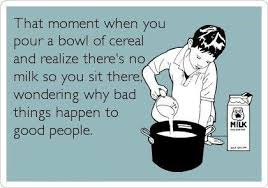 SO TRUE!  Have a great day!