Have you ever been in a situation where you feel like you don’t know anyone in the room, or you are the new person, or you feel like the odd person out in a situation?  I know I have.  As a child our family moved a lot – and I mean a lot!  Growing up my family moved from Oregon, to Washington, to Michigan, to Virginia, to Tennessee, to Texas, to California, and then to Utah.  I was constantly the new girl who knew no one.  I still remember those feelings of being the new girl and the odd person out.  It was scary and intimidating every time we moved to a new place.

I honestly don’t think it was until I became an adult first starting in the business world that I discovered something incredible.  I was at a business event where I literally knew no one in the room.  I felt totally out of place and uncomfortable.  In my head I was thinking that everyone in the room was probably staring at me thinking “who is this girl and why does she think she is welcome here”.  Then something amazing happened.  A total stranger came up to me and smiled and put out their hand to shake my hand and said “hello”.  It was as if this person was a superhero sent there to save me from my feelings of absolute awkwardness.  The person sat and talked to me for a minute or two and then moved on to say hi to the next person.  I sat there for a moment and thought “Wow! That was awesome of that person!”  I wasn’t bothered that they were talking to me, I was unbelievably grateful to them!  And there it was – the light went off in my head and I realized on of the most important lessons of my life – No one is ever going to be offended by having a stranger say hello to them – in fact, they will be grateful!  Because nine times out of ten everyone else in the room is feeling as awkward and uncomfortable as you are!  Everyone wants to feel accepted and acknowledged, just like you do – so why not be the one to walk up to others and simply say “hello”.  That is all it takes.  Walk up to strangers in the room, make eye contact, smile, and just say “hello”….I promise you will change their world when you do that, just like the person in that meeting changed my world that day.

From that day forward I have been willing to walk up to the people in a room that I don’t know and say “hello” and that has served me unbelievably well in my business life.  It opened doors and broke down walls and barriers in a moment.  It created bonds and friendships that have lasted for years on end.

All of us have an inherent need to belong, and all of us have the desire to be accepted and to feel included.  Study after study has shown that the feelings of being included and accepted directly impact our psychological and our physical health, and that mental and health problems are more common among people who lack social attachments.

A study was published in Psychological Science in January of 2012 by psychology professor Eric D. Wesselmann and three of his colleagues at Purdue University.  The published study is titled “To Be Looked at as Though Air: Civil Attention Matters.”  In the study it states:  “Because social connections are fundamental to survival, researchers argue that humans evolved systems to detect the slightest cues of inclusion or exclusion. For example, simple eye contact is sufficient to convey inclusion. In contrast, withholding eye contact can signal exclusion. … Even though one person looks in the general direction of another, no eye contact is made, and the latter feels invisible.”

Following a little ways behind this woman was another person involved in this study.  She would stop each person that the first girl had done one of the three gestures to and she without letting them know she was affiliated with the first girl, she would ask them two questions – 1. “Within the last minute, how disconnected do you feel from others, on a scale of 1-5?” and 2. “Within the last minute, have you experienced acknowledgment from a stranger, yes or no?”

The result of the survey is shown below: 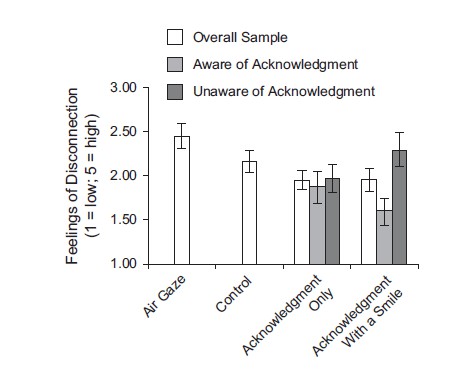 The people who got no eye contact felt the most disconnected. The people who had the eye contact with the smile felt the most connected – and isn’t it interesting that over half of them didn’t even realize the eye contact with the first girl had occurred when they answered the question.  Proving that our subconscious is picking up the positive acknowledgement received from others and it contributes to our feelings of acceptance and well-being.  Now that is powerful!

Have a great start to your week this week!