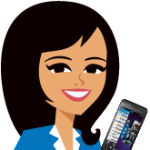 I think it’s awesome to learn about other people’s views and beliefs because it helps us get to know where other people are coming from. And I am proud of my own views and beliefs and I am willing to share them anytime, with anyone, who wants to know them in order to get to know me and where I am coming from. Perhaps if we all go into sharing our beliefs with the intent of learning more about each other, and coming to understand and appreciate each other more, we could actually learn a tremendous amount.