Today I had a luncheon and board meeting for the Stella H. Oaks Foundation board that I serve on.  The mission of the foundation is bringing hope to single moms through education. Let me explain why the foundation bears Stella’s name.

Stella H. Oaks was a single mother of three after her husband died of tuberculosis when she was 34 years old. She had three young children at the time. Her oldest son Dallin H. Oaks was seven years old and she had a four year old son, Merrill, and a one year old daughter, Evelyn. Six months after he died she left her little children with her parents and she went to Columbia University to pursue her Master’s Degree but she soon found it was more than she was able to handle emotionally. She wrote:

“As the weeks went by my heart…ache[d]…for my children…. I studied harder and longer in an effort to cope. One day as I was trying to write I was aware that my hands were trembling and that I could no longer recall the names of my children…. I began to sob and felt myself engulfed in a dark abyss from which I had not the power to raise myself. Though I was within three weeks of finishing the term, I could not do it. I was given incomplete grades and comforted by a counselor who said that in six or eight years I would get hold of myself and be able to return for completion…. This was the lowest ebb of my life; I had lost everything even myself.”

She returned home to her family to recover and she worked for the next three years as a teacher. She was then able to return to her school to finish out her degree. She understood firsthand what it was like to struggle with a mental health issue so she became a big advocate for those who struggle. She also formed the Child Guidance Clinic in Provo Utah to help children with psychological difficulties. In addition, she was elected to city council and she served a term as assistant Mayor. Stella lived a remarkable life and her example has touched a tremendous number of people’s lives for the better, and here she still is impacting single mother’s lives for the better with these scholarships that bear her name.

During our lunch today her oldest son President Dallin H. Oaks (who serves in the First Presidency of The Church of Jesus Christ of Latter-Day Saints) shared several stories about what an amazing businesswoman, government leader, and mother that she was.  The more he shared about her the more it became very clear to me that she and I would have gotten along very well if she were still living. She had intelligence and grit and just the right amount of sassy to her and I loved hearing about all the people whose lives she has impacted for the better.

In talking about Stella today someone said, “The difference one very determined person can make.” SO TRUE! When I heard that phrase I immediately wrote it down to be able to share it with all of you.  Stella H. Oaks was one very determined woman who overcame tremendous obstacles in her life and went on to do so much good for single mothers and their children. Her impact and her name will be felt for generations to come. #gofundmom

We can all make a difference if we too are willing to be that one, very determined person!!!  #gofundmom  @stellahoaks 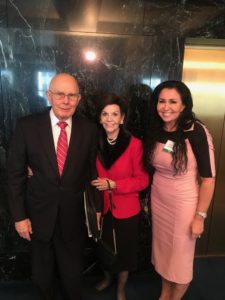