The last two weeks have been crazy for me and my family!  Let me backup and explain.  My family’s favorite place on the planet is Lake Powell.  Lake Powell is our heaven on earth.  We started going there when my kids were just little at the invitation of some good friends.  They invited me down when I was still a single mom with my two young kids and we had the time of our lives. They even helped teach my kids to wakeboard and watching them get up on the wakeboard for the first time when they were very young was an amazing experience.  They were so excited and so proud of their accomplishment of getting up on the board that I determined right there and then that I would buy a ski boat so I could take them to the lake and continue letting them spend time on the water improving their skills.  I was nervous about taking care of a boat all by myself back then because I could barely handle it when my car broke down, but seeing the joy my kids had on the water gave courage to go forward and buy my first ski boat.

Year after year we went back down to Powell with different groups of friends and year after year my kids would share that Lake Powell was their favorite place on earth.  I could offer them a trip to anywhere in the world and they would still choose Lake Powell first.  It held a special place in their hearts.  And as time would show, it came to hold just as special a place in my heart as well seeing as how that is where I ended up meeting my husband Rollin.  We met on a friend’s houseboat down at Lake Powell and from that trip we ended up dating and getting married.  So you see, Lake Powell has come to represent a magical place for me and for my family.

When Dalton left on his mission his one request was that we plan a big Lake Powell trip for he and his friends upon his return home from the mission.  He was gone two years and during the two year mission when things got rough he said he would just think of his epic Lake Powell 2014 trip he would get to take and that would get him through the hard times. So I knew how important it was for me to make his 2014 Powell trip happen.

I had purchased a houseboat with two partners for our family while he was out on his mission in preparation for his return, but then a year ago a friend called out of the blue to ask me to sell him my share of that houseboat.  It was unexpected to get the offer to sell it to him, but I decided that I would say yes so long as I could have a new houseboat built in time for my sons return.  That was my one requirement – it had to be done on time or I couldn’t sell the other boat.  We worked through the details with the builder and proceeded forward to design and build our own houseboat.  Now mind you, I was also building a house during this same time with the same deadline to get it completed so it may not have been my wisest decision to think I could pull off getting both done, but I was determined so I went forward.  We finished the house on time but the houseboat was not so lucky.  We ran into all kinds of delays and we had to push back my sons epic Lake Powell 2014 trip three times.  By the third change in dates I was dead set on the fact that we were getting this boat on the water no matter what it took.  And so my entire family made a pact that we would work our tails off to make sure that we could keep our July 13th trip as scheduled.

The bottom two floors of the boat had to be transported from where they are built in Kentucky. Then the top two floors were built in Page Arizona, but the middle floor couldn’t be built until the top and bottom were ready to be assembled together which would create the middle floor.  There was still a tremendous amount of work to happen once the bottom floors arrived.  We drove down to Page the week before the 13th to wait for the boat to arrive.  We had everything ready to go that we could as we had spent months and months getting bedding, and dishes and towels, etc for inside the houseboat.  Due to major issues in transport the boat didn’t arrive until Thursday the 10th around 2pm.  Our guests were slated to arrive on Sunday the 13th.  Assembling an entire boat in a few days would be impossible.  Normally that process takes four to six weeks at a minimum!  But we refused to give up hope and instead we went to work…and I mean we worked!  We went from 8am to 6am the next day straight through, then we slept for three hours and went right back to working.  This went on from Thursday to Sunday and we had huge crews from the yacht company there working with us round the clock.   What was able to be pulled off in those few days was nothing short of a straight up miracle.  It truly was.  No one will ever appreciate the amount of work that was done in those days unless they saw it with their own eyes….it was an unheard of amount of effort mixed with a straight up miracle.

We finally were able to get the boat in the water on Monday the 14th and we were able to take it out on Powell by Wednesday the 16th for a few glorious days of fun with my children and their group of friends.  We were all exhausted beyond belief from working round the clock and I got super sick from the lack of sleep and lost my voice, but the experience bonded everyone who helped with it, especially my family.  We had accomplished the un-accomplishable and we had done it by working hard, sheer determination, and tons of prayers…we had refused to give up and it paid off.  Sure there were a million details still needing to be done on the boat, but we were able to take their maiden voyage that my son looked forward to for so long.  We had achieved victory as a team and it was a great feeling.

The lesson we took away from our experience was that you can accomplish just about anything if you are willing to do what it takes to work for it and if you stay determined in your resolve.  Never give up if something truly matters to you.  Miracles can happen!

Here is a photo of the finished houseboat “BeDazzled” on beautiful Lake Powell.  We can’t wait to get down there again!  Heaven on earth…heaven on earth…. 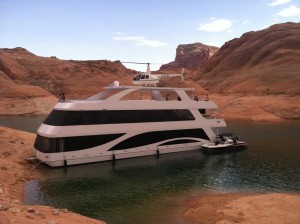