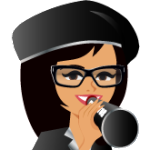 Last Thursday iconic independent filmmakers Robert Redford and George Lucas sat down to be interviewed by renowned film critic Leonard Martin at the Sundance Film Festival Power of Stories panel. I was fortunate enough to be present for this discussion which was titled, “The Visions of Independence.” It was clear from the conversation that these […]

Yay! I am so excited that Christmas break has officially begun and both my kiddos come home from college tonight to spend the holidays back at home with us!  BEST PRESENT EVER!!! Having your family back together again is the absolute best gift in the world.  For me this will be our first Christmas together […]

The last two weeks have been crazy for me and my family!  Let me backup and explain.  My family’s favorite place on the planet is Lake Powell.  Lake Powell is our heaven on earth.  We started going there when my kids were just little at the invitation of some good friends.  They invited me down […]

Sundance Film Festival is coming up from January 16th – 26th, 2014 and I am super excited about it, especially after getting a sneak peak tonight into the list of films that will be shown at the upcoming festival. For those who may not be as familiar with the film festival, it was originally started […]

What Awesome Looks Like: How to Excel in Business and Life
by Amy Rees Anderson
Available in January 2019
Pre-Order Your Copy
Recent Posts Archives