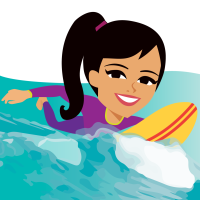 Last week my family and I were at the lake with our friends and my husband and I offered to teach those who had never surfed behind a ski boat before how to surf. Several people’s first response was to voice “I can’t do that”. However, it wasn’t because they were incapable of doing it – it was simply because they hadn’t ever done it before – but there initial reaction to trying something new was to immediately think “I can’t do that”.

When there is something new to take on in any aspect of our life there is often an immediate tendency to think “I can’t do that”…but we need to recognize that 90% of the time that thought comes from the fact that we haven’t done it before – not the fact that we are genuinely incapable of doing it.

None of us should ever assume we aren’t capable of doing something just because we haven’t done it before. The truth is that we will never know what we are capable of until we actually try. And just like it took some people three or four or even more attempts than that at surfing before they were able to actually get up on the board and do it…sometimes we just need to give it a few more attempts in order to be able to accomplish it. The most important thing is never to rule it out before we have even given it a fair try.

We are all capable of doing extraordinary things in life. But we will never discover what those are until we stop ourselves from thinking “I can’t do that”….Instead, remind yourself: “Just because I haven’t done it yet, doesn’t mean I can’t do it!” You simply haven’t done it YET!

Have an amazingly good day everyone!