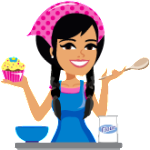 It’s true, stressed spelled backwards is desserts! Coincidence? I think not!!!  So for the past year I have been trying to eat healthier, which means having to give up treats, which is pretty much the same thing as giving up happiness if the truth were told! Genuinely, giving up candy and desserts really is like saying goodbye to happiness!! It hurts my heart just to write the words “give up candy” and “give up desserts”, it really does.  Now, don’t get me wrong, I think it is super important to be healthy which is why I am trying so hard to stick to this healthy diet, but some days I just really miss dessert!

You see for me happiness is a big bowl of ice cream.  Even better is a big ice cream cone!  The joy of licking ice cream is like taking a trip in a time machine back to the days of being a kid and chasing the ice cream truck as it played its hypnotic melody coming down your street.  Ah, yes, the joy of those moments when the ice cream man would hand you the bomb pop Popsicle with the red, white, and blue flavors of pure sugar, frozen on a stick.  Did life ever get better than that?!? I say not!!

When I hired a dietician earlier this year she came to meet with me and she explained that she wanted me to give up candy and desserts I felt like I was watching an episode of Charlie Brown when the school teacher talked and all Charlie Brown heard was “waaaa waaa, whaaa whaaa, waaaaa” …she had lost me at the no more candy comment.  I wanted to remind her of Erma Bombeck’s famous quote:

“Seize the moment. Remember all those women on the Titanic who waved off the dessert cart.”

Then I tried to come up with a more reasonable approach that would appeal to her with an economic development rationale as to why candy was important by sharing the quote:

“If not for chocolate, there would be no need for control top pantyhose. An entire garment industry would be devastated.” After all people, we were in a recession so clearly it would be wrong for us to hurt an entire industry like that by giving up chocolate!  Just think of the job loss! How could we do that to people?

Then I realized that as the girl who at the time thought a balanced diet was having a diet coke in one hand and a cookie in the other, that I was not really qualified to be giving her lectures on healthy eating. And so I decided that I was going to really try and do better.

Getting healthy takes taking a lot of baby steps toward eating better. I knew I could never give up all sweets cold turkey, but I took baby step after baby step trying to head in the right direction in the hope that if I took enough baby steps every day I might just walk enough off to justify enjoying a small dish of ice cream once in awhile….Hello again happiness! 🙂

All in all I’ve done decent over this last year of eating healthier. But the absolute hardest time to stick to eating healthy is over the holiday month. Good heavens there are amazing goodies floating around at Christmastime, and they seem to be everywhere! It’s hard to be good. And so my suggestion is this (and I write this part mainly as advice to myself because I need the pep talk to make it through this month without devastating my scale) – remember it’s about taking baby steps. If you can’t avoid the sweets all together than try to just eat a bite or two instead of the entire pie, or try having one bite of the chocolate instead of the whole box. And instead of taking the elevator next time try walking up the stairs. It may be one small step for mankind but it could save you one huge leap of trying to jump into your skinny jeans again…

Here’s to all of us trying to stay healthy this holiday!