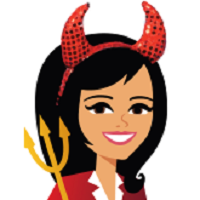 There are so many ways to off-track in life, and so many of them happen through a series of poor smaller choices that end up leading to big mistakes, but those big mistakes wouldn’t have ever occurred if we had simply made the right small choices to begin with.

C.S. Lewis has to be one of my all-time favorite authors. And one of my favorite books in life is C.S. Lewis’ The Screwtape Letters. The Screwtape Letters contains a set of fictional letters written by Screwtape, the master devil, to his apprentice Wormwood, who Screwtape is training to become a master devil like himself.  In each letter, Screwtape is explaining to Wormwood the best ways to keep mortals from being close to God, whom he refers to as “the Enemy” in the letters, and the best ways to draw mortals away from God.  What I love about this book is that it causes you to really consider all the ways in which we as mortals can be tempted to go off-track in life. There are so many incredible quotes in this book but here are just a few example of different quotes from the book where Screwtapes is explaining to Wormwood how to best lead the mortals astray (each one illustrates a different point):

“There are things for humans to do all day long without His minding in the least – sleeping, washing, eating, drinking, making love, playing, praying, working. Everything has to be twisted before it’s any use to us.”

“Never forget that when we are dealing with any pleasure in its healthy and normal and satisfying form, we are, in a sense, on the Enemy’s [God’s] ground. I know we have won many a soul through pleasure. All the same, it is His invention, not ours. He made the pleasures: all our research so far has not enabled us to produce one. All we can do is to encourage the humans to take the pleasures which our Enemy [God] has produced, at times, or in ways, or in degrees, which He has forbidden.”

“And while he thinks that, we do not have to contend with the explicit repentance of a definite, fully recognised, sin, but only with his vague, though uneasy, feeling that he hasn’t been doing very well lately. This dim uneasiness needs careful handling. If it gets too strong it may wake him up and spoil the whole game. On the other hand, if you suppress it entirely – which, by the by, the Enemy [God] will probably not allow you to do – we lose an element in the situation which can be turned to good account. If such a feeling is allowed to live, but not allowed to become irresistible and flower into real repentance, it has one invaluable tendency. It increases the patient’s reluctance to think about the Enemy [God].”

“For as things are, your man has now discovered the dangerous truth that these attacks don’t last forever; consequently you cannot use again what is, after all, our best weapon – the belief of ignorant humans, that there is no hope of getting rid of us except by yielding.”

“It is funny how mortals always picture us as putting things into their minds: in reality our best work is done by keeping things out.”

“There is nothing like suspense and anxiety for barricading a human’s mind against the Enemy [God]. He wants men to be concerned with what they do; our business is to keep them thinking about what will happen to them.”

“You will say that these are very small sins; and doubtless, like all young tempters, you are anxious to be able to report spectacular wickedness. … It does not matter how small the sins are, provided that their cumulative effect is to edge the man away from the Light and out into the Nothing. … Indeed, the safest road to Hell is the gradual one—the gentle slope, soft underfoot, without sudden turnings, without milestones, without signposts.”

If you haven’t read the book I highly recommend it. It will definitely force you to get introspective on your own life and the ways in which you want to improve yourself and guard against all the things that could pull you off-track.