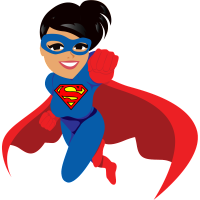 “Stop being a worrier and start being a warrior!” – unknown

I lost several weeks of productivity when I was down sick with the flu the last few weeks. It put me so behind on everything that I found myself worrying to no end over how I will possibly catch back up again. and worrying how I will ever get everything accomplished that I need to by the deadlines coming up. I have been worrying so much, in fact, that I have found myself totally frozen…feeling afraid to start anything because everything is so overwhelmingly past due…I couldn’t figure out what to even start on first.  It is a a terrible feeling to feel frozen with worry…

As I climbed out of bed this morning, finally feeling 90% over my flu bug, it hit me – the only way I was going  to get anything done was to start on something…anything….I just needed to start!  And I started to realize that if I focused on everything all at once I was going to get absolutely nothing accomplished.  So I determined to force myself to start on just one item at a time and focus solely on that until I completed that one item.  Then I had started on the next item and focused on just that one and only that one. I had to focus one single thing rather than letting myself focus on the entire pile of things that I need to get done.  And so I took it one item at a time, doing one after another, and telling myself all I could do was just keep going on my “one thing at a time” until the day was done.  Then tomorrow I will wake up and do it again…because that’s really all we can do…one thing at a time, doing the best we can to do as many of those one things in our day as possible.

Focusing on just one thing at a time is literally the only way I have found to keep from feeling frozen with worry, and heaven knows I do NOT like it when I become a worrier. I would much rather be a warrior!

Theme for the day:  “Stop being a worrier and start being a warrior!”