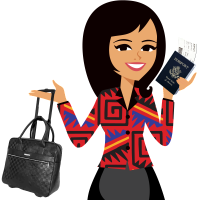 The last few days while I was in LA working on a project, I wasn’t able to get much sleep. Then I had to wake up really early this morning to catch a flight back home to Utah. I was running late to the airport in LA so I didn’t stop and eat breakfast. I flew home to find that my husband, who was supposed to be picking me up from the airport, was stuck on the freeway and couldn’t get to the airport because a tanker truck hauling chemicals had crashed on the freeway and the freeway was completely shut down while they waited for hazmat to come and clean it up. To make matters worse, the spill was a chemical used for blasting in mining so when it began thundering and lightening outside the hazmat workers had to pull back from the cleanup to wait for it to stop.

I was running late already so I in a major hurry to get to Steve Case’s ‘Rise of The Rest’ Event that I had promised to be a judge for the business competition event where Steve (co-founder and former CEO of AOL) would give a company a $100,000 investment. I decided I had better hail a taxi rather than waiting for my husband to get out of the traffic jam. What I didn’t realize at the time I climbed into the taxi was that the freeway was going to be closed going that direction well! Grrrr…that meant winding around all kinds of back roads that were filled with cars trying to do the same thing…I was SO tired….oh, and did I mention that I still hadn’t eaten anything?

I made it to the event without a minute to spare and thankfully I was able to fulfill my promise to judge the competition. I did my best to fake being wide awake but inside I was crashing hard. The second I finished I realized that I was late to the next event my family was committed to attend so I rushed out of there and drove to the next event. It was getting dark out and boy was I dragging…oh, and did I mention I still hadn’t eaten anything, cause yeah…I hadn’t…I was officially hangry and slangry…

It was a miracle that I was able to pull it together enough to get through the next event without completely melting down…the fact they had food served cured my hangry-ness and gave me just enough energy to get myself home and write this blog, but this slangry girl is worn out and it is in everyone’s best interest if I turn off the computer now, avoid all interaction, and get myself to bed!!! Nobody enjoy a slangry person 🙂