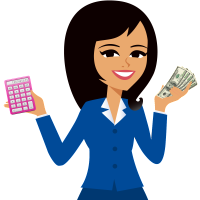 As an Angel Investor and a Mentor I spend much of my day helping entrepreneurs in their pursuit of wealth by helping them to grow their companies. But today I was reminded of exactly what true wealth looks like.

For more than 25 years he has been buying Christmas presents for children he may never even meet. No he doesn’t run a personal shopping business, and he doesn’t get paid to go out and buy people’s gifts for them. Not only is he not getting paid for buying gifts, he is actually buying these gifts with his own hard-earned money.

His name is Delwyn Collins and growing up he was labeled handicapped because he had a learning disability.  “I grew up as a handicapped. I went to a special education school. I had a slow learning problem. I had a hard time trying to read and write and spell out words. What was so hard about it, I had people making fun of me.”  But bullies couldn’t break the spirit of Delwyn Collins. Instead, he chose to be inspired by them. He chose to dedicate his life to showing children that there is someone in this world who loves and cares about them. And loving and caring about children is exactly what Delwyn has spent his entire adult life doing.

Today Delwyn is 56 years old and he rides his bike six miles to work each day to Tampa General Hospital in Florida where he works as a dishwasher. He is a dishwasher by day, and Santa Claus by night. You see, throughout the entire year Delwyn takes a portion of his own hard-earned money and he goes to buy presents that he will store in his secret location until Christmas arrives and he can give the presents to foster children throughout Florida. He shared that he often puts in overtime hours so he can get paid time and a half because it gives him even more money to go buy presents for the kids. Over the years Delwyn has personally purchased thousands of toys for hundreds of children.

Not only that, but for 26 years now Delwyn has set up a Foster Angels Giving Tree at the hospital where he works and he decorates the trees with paper angels that list the names, ages, gender, and the gifts that foster children in the county would like to receive for Christmas that year.  His example has inspired his hospital coworkers and hospital visitors to take the angels from the tree and return with gifts for all of the children. In fact, so many gifts come in each year that the cafeteria is literally overflowing by Christmas. Even Santa’s sleigh couldn’t carry all these gifts, unless Santa planned to trade in his sleigh for a semi-truck.

Because of Delwyn over 5,000 kids in foster care have received Christmas gifts over the years. His humble response, “I just want to show these children there is somebody out there in the community who loves them.”

When asked why he didn’t let his childhood struggles stop him he states, “I show the people as a handicapped kid, what I went through, if I can make it on my own somebody else can too.”

When asked how he can afford to spend his meager wages buying gifts for so many children he responds that he already has everything in life that he needs. “My job is to help and give to others,” says Collins. “God doesn’t care if we’re rich or poor.”

Delwyn’s example is more powerful than the most eloquent words could ever write. Hearing his outlook on life and feeling his genuine love for his fellow man is enough to bring even the strongest person to tears.

“I had people who needed some money on the street so I gave them a couple of dollars for bus fare or to just get by,” he says. “I’m not a millionaire and I don’t own a car, but what I do makes me feel good on the inside.”   To Delwyn Collins I would say, “If true wealth lies in the good you do then you, my friend, are truly the wealthiest man in this entire world.”

May we all take a page from the Delwyn playbook this holiday season.