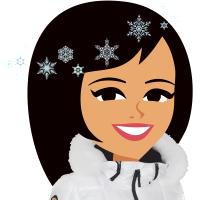 When I left to work this morning there wasn’t a drop of snow on the ground, so imagine my surprise when I go to leave work tonight at 6:30pm only to find that it had been dumping down snow leaving my car covered in snow and the roads home a snowy mess. …And of course I forgot to put my snow scraper in my car…oh, just a little tip for everyone – unrolling your car windows as a way to clear them of snow is NOT as good an idea as it might sound on paper…especially since the walls of snow against the windows fall into your car onto your seats instead of falling outside onto the ground…yeah…lesson learned and a wet bum to prove it  😐

Yes the first big snowstorm of the year has officially arrived in Utah and driving home in it was not a lot of fun, but thankfully, I was able to make it home safe and sound. As I was driving home and watching all the cars sliding all over the roads I found myself grumbling about how miserable the snow was. But then as quickly as I had begun grumbling to myself another picture jumped into my mind just as clear as day – it was a picture of how my younger self would have reacted to the first snowstorm of the year:

I saw myself as a little girl squealing with delight at the beautiful blanket of white snow falling.  I could feel the excitement I would have had at the thought of getting into my snow clothes to go outside and build a snowman! I saw myself lying on the ground making snow angels with a huge smile across my face. I felt the excitement that came from the anticipation of knowing that school might even be cancelled the next day, and nothing, and I do mean nothing, was better than a snow day off school and a sled just waiting to be ridden down hills.  I saw pure happiness…

What a great lesson for me to be reminded of tonight! I have repented for choosing to feel miserable and now I have only one thing left to say – Let’s go build ourselves a snowman!!! 🙂