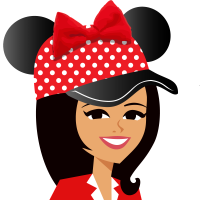 Those of you who read yesterday’s blog post learned that my 20 year old daughter Ashley’s birthday present to me this week was to write a few blog posts that I could use in order to give me a few nights off on my birthday week to enjoy myself. This post she wrote below is AWESOME and I love the story she shares and the life lesson she took away from it – Thanks to Ashley for inspiring me with this post and I am confident it will inspire all of you as well! Have a fantastic weekend everyone!! Yay for weekends 🙂

The following post was written by Ashley on August 31st, 2016 about a life lesson she learned:

I recently returned home from a Disney Cruise with my family that toured the Mediterranean Sea. While on the cruise there were many shows, events, games, dinners, and various forms of entertainment.

One night my older brother Dalton and I decided to attend a class where we would learn how to draw the Disney character Stitch from one of the crewmembers. An observation that someone in the class had made was that the pencils provided upon arrival did not have erasers at the ends. The crewmember laughed and went on to explain. Walt Disney had a phrase that he whole-heartedly believe in. “There are no mistakes—only discoveries!” For that purpose they did not allow erasers in the room. Everything that we were to draw on the paper while attempting to draw Stitch would be a fantastic discovery! For the good AND the bad.

“There are no mistakes—only discoveries!” That profound statement deeply impressed me. As I reflected more on those words I came to a greater understanding of the amount one could benefit with that same attitude towards life. It’s the whole “glass half full” vs. “glass half empty” concept. We should just all be content with the fact that we even have the glass!

Walt Disney truly personified this theory. He made a conscious decision to CHOOSE to look at the positive when there were many negative influences in his life. He grew up with a rough family background and came to develop depression over the years. He struggled with but fought this illness his whole life. But if there is anyone who has brought happiness to the planet Earth, it’s certainly Walt Disney! From his influential family films, amusement parks, and the overall motto that “Dreams Come True”, Walt Disney continues to bring a contagious light to the world!

From this simple encounter, I learned that one small positive thought can and does change the entire world and generations to come.