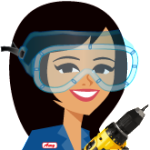 I was watching something the other day where s a mother to a teenage boy was busy doing her son’s laundry while her son was busy playing on his Xbox. The more I observed the situation the more I wanted to scream out “If your child is capable of conquering level 15 of their video game they are certainly capable of doing laundry!” I’m just sayin’……

One of the hardest things about being a parent can be the need to be willing to give our kids responsibilities early and often. It may not sound like a hard thing to do, but in actuality, it really is, especially when our kids are young and especially for those of us who are mothers. Our natural instinct is to protect our kids at all costs, which is a good thing, but sometimes we take protecting our kids to such an extreme that we end up hurting those very people we wanted to protect. If we aren’t mindful we can end up crippling our own children’s ability to become self-reliant.

When my children were young I thought I was doing a pretty good job of putting them to work because I basically didn’t have a choice, as a single mom I needed their help! So I taught them to do their own laundry and make their own school lunches and clean their own rooms from the time they were little, and I thought I was doing dang good at teaching them responsibility. But when my kids were 8 and 11 I go remarried to a man who grew up on a dairy farm in Idaho and he introduced a whole new world of work to my kids. Our first year of marriage he started construction to finish out the basement of our home we were living in and he decided to have the kids help him. The first day I came down to see the construction going on I about passed out! He had the kids operating the table saw, wiring the light sockets, and installing the electric plugs. I had a complete panic attack! What was my husband thinking??! These were my two little babies! They were still little kids and here he had them using a table saw and all kinds of power tools?!?! They could cut their hands off for heaven’s sake!

My husband asked me to calm down and observe the kids in action. He had me stand there and watch these two kids as they were working on this project that I thought only trained adults should ever touch. So I stood and watched….and man was I surprised. These two kids had the biggest smiles on their faces. They were following every instruction their dad had given them on how to be careful and how to handle the tools. And their faces just lit up with pride at the fact THEY WERE DOING HARD THINGS!

The truth is I never would have even thought to put that level of responsibility on my kids shoulders. I thought I was doing pretty good by letting them make their own Peanut Butter Sandwich for the their school lunches. The bottom line is that I learned a great lesson that day. Our children are far more capable than we allow them to be and if we will just allow them to take on more responsibility at a younger age, and teach them to do things properly at that age, we will do more to empower our children’s future’s than we can ever imagine.

We have to stop thinking that a good parent is one who does it all for their kids – it’s not. A good parent is a parent who is willing to teach and then delegate HARD THINGS for their children to do, starting when they are little. Kids need responsibility to grow their self-esteem and their self-confidence. Don’t let your fears stand in the way of your children’s growth in life. Our children CAN DO HARD THINGS – we just need to let them.